The build up to the Aaron Cheung interview was awkward and I only had myself to blame.

We landed in Melbourne half an hour late, were unprepared for the rain, and stumbled into the café with our luggage trailing behind us. But more than this, I was intimidated by the thought of meeting Aaron: someone I had followed obsessively on social media and who, I concluded, was the sort of guy you didn’t want to mess with.

One photo, in particular, comes to mind. In it Aaron is wearing a dark suit and smoking a cigarette while leaning against the concrete wall of an Art Deco building. His eyes are closed and his head is lowered as if he’s lost in his own thoughts. Clearly influenced by film noir, there are dramatic shadows cast across his face which emphasise edges and angles that echo those of the cold structure behind him. In other words, he looks like Vietnam’s answer to Jef Costello: a man of few words and even fewer emotions. 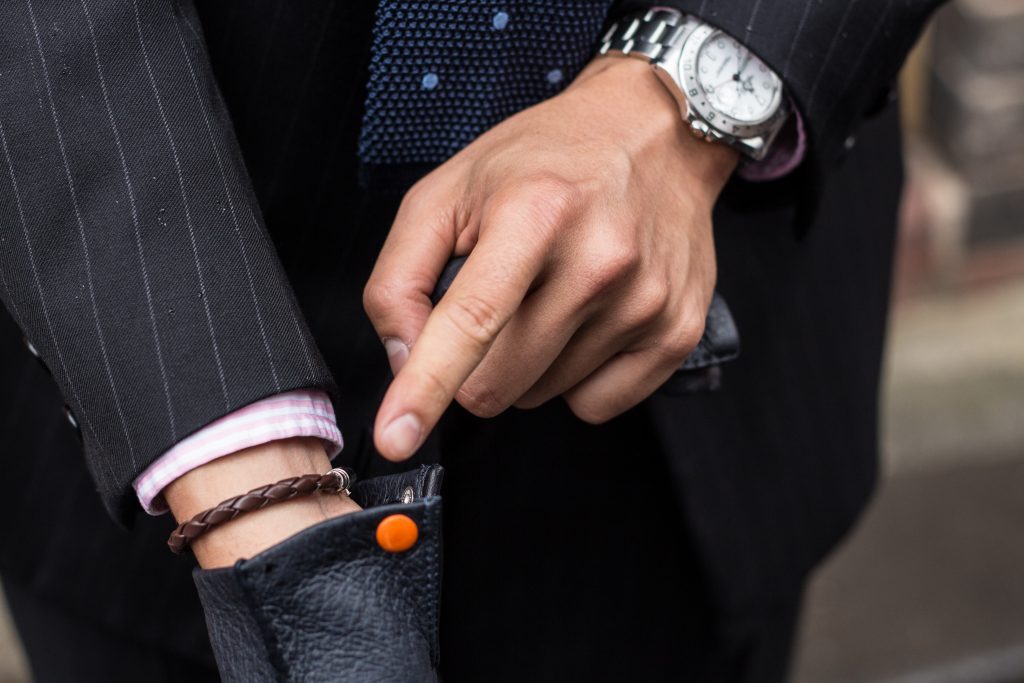 But at only 26 years old, Aaron Cheung is the youngest, and possibly friendliest, guy we’ve ever interviewed: a university student, a former member of The Armoury, and despite being only five foot seven, a serious baller. “People in Vietnam love soccer,” Aaron says. “But I’ve played basketball for five or six years — seriously as a small forward for the past 2-3 years for a team here, and one in back in Vietnam.”

Yet despite his sporting prowess, it’s the menswear game that he really seems to be winning.

Over the last two years, Aaron’s gloves have taken off. Crafted in Hungary by a third-generation family of artisans, they’ve received high praise from Put This On, been recommended by Die Workwear, and they’ve even been featured in a Korean compendium of men’s style. And the reason is simple: they’re one of the best value menswear  propositions in the country. 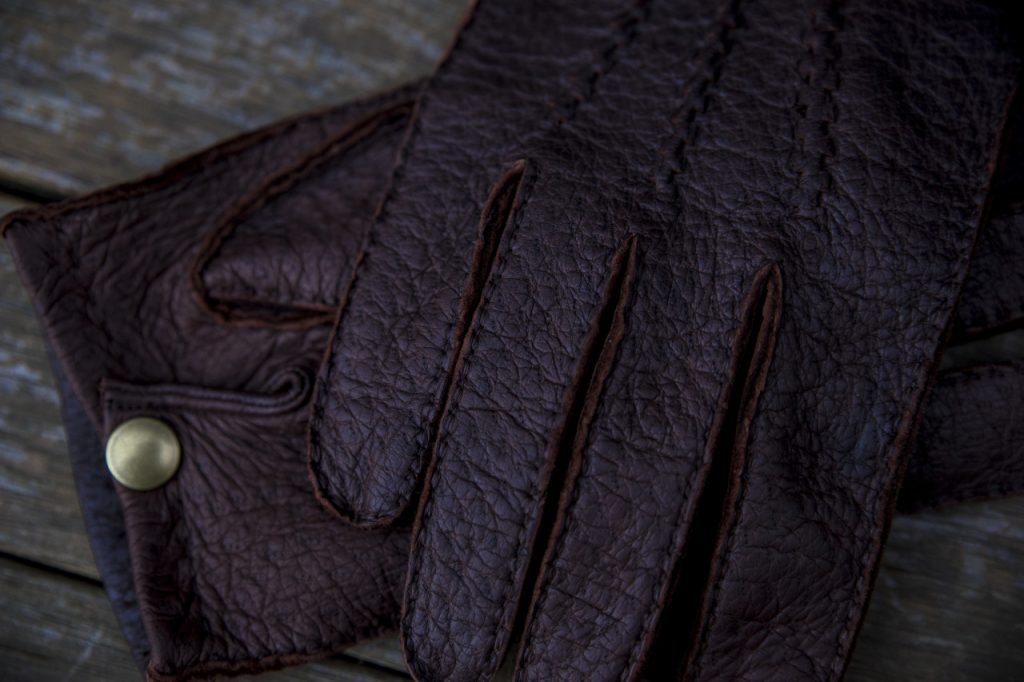 Gentlemen’s gloves have a rich and complex history. Like many garments worn today for their aesthetic appeal, they originally served functional purposes. In Ancient Greece, Xenophon recounts Persians donning gloves for protection against the cold. And in 9th century Europe, gloves were universally worn to prevent the spreading of diseases.

By the end of the 10th century, gloves became increasingly removed from their original roles as protective items and developed strong ritualistic and symbolic functions. It was unthinkable for a Victorian gentleman to leave home without a pair — the etiquette of the day demanded that a clean hand be presented for shaking and that they were shown spotless in the company of women. Gloves were henceforth glanced at critically, and therefore had to be made of the finest leather, fit perfectly, and – defying their original functions – were never allowed to show the slightest traces of dirt.

But today gentlemen’s gloves seem a little odd. They’re for the most part no longer required in everyday life and they have both work-wear and formalwear connotations which simultaneously link them to aristocratic dress and working class uniforms. In other words, gloves possess a constellation of contradictory meanings.

So why would anybody want to make them?

Aaron answers simply: “Nobody else does them. There are a lot of guys doing great things: made to measure suits, custom made ties, pockets squares. I don’t think I’d be able to compete if I didn’t do something different.”

In a market where the savvy menswear consumer is spoiled for choice, Aaron’s offering is unprecedented: affordable peccary and carpincho gloves which fit like second skins.

Peccary is a marshmallow-soft leather with a grainy surface resembling a topographic map of the Andes. Sourced from a wild Peruvian pig, the leather is sturdy, supple and elastic. It also has a distinctive texture, resulting from cutting the leather a longe (along the back of the animal) and is visually remarkable for the deep pores which run horizontally in groups of three, across its face.

Carpincho, on the other hand, is a pockmarked leather resembling suede harvested from the hide of the Argentinian capybara: a semi-aquatic rodent the size of a pit bull. Like the animal it’s sourced from, the leather exhibits incredible durability and is also cut on a one-way grain (meaning that over time they’ll mould to the shape of the wearer’s hands without becoming loose or misshapen).

“They also look quite scary,” Aaron adds. “Especially when compared to deerskin and lambskin gloves which are quite basic.”

The appearance of carpincho and peccary also improve with age as they acquire patinas — idiosyncratic lustres resulting from the leather absorbing natural oils from the wearer’s hands, and their exposure to the elements. An olive pair of carpincho gloves, for instance, can develop military green discolorations that recall the fades of vintage field jackets. And a pair of brown peccary gloves — a suitable option for business formal attire — can acquire varying shades of whisky that can imbue these conservative garments with an adventurous personality.

Aaron however is adamant that fit comes first. “The most important thing is the knuckles,” he explains.  “Then the middle fingers.” He goes on to describe his measuring procedure. “Using the middle finger as an anchor point I work out the approximate measurements of all the other fingers. Then I measure the thumb and pinky because people have different measurements for the pinky and thumb — not so much the other fingers.”

Aaron relishes the challenge of fitting difficult hands. Besides finger lengths and knuckle locations, the thickness of the hand and other physical minutiae are also taken into account. Even damaged hands, like Jared’s from AP Millions, no longer faze him.

“He actually lost the knuckle of his right pinky,” he reveals. “He said he punched someone.”

He sips his coffee.

“And I believe him.”

Aaron also offers custom gloves that enables countless variation.  With over 50 colour ways (including shades like Sienna, Carmine and Melanzane), a multitude of linings (Aaron recommends going unlined to ensure the gloves “fit like a second skin”), various wrist closures (buttons or straps), and a myriad of piping colours, his range is as extensive as it is intensive. It’s a perfect combination of quality and quantity that has won Aaron many fans including the likes of Joe Ha of The Finery Company, Giulietta Falvo of Oscar Hunt Tailors, and Fabio Attanasio of The Bespoke Dudes.

“I don’t have any rules,” he says of his approach to menswear. “But I find that if I don’t follow certain rules, over time, not following these rules becomes my rule.”

Aaron, however, has always been something of a non-conformist.

Growing up in a Vietnamese family that had no interest in fashion, and with limited access to the internet, Aaron looked to menswear magazines for style inspiration. Given the country’s Confucian gender roles, however, his relatives didn’t exactly approve of his behaviour.

“They thought I was gay,” he laughs.  “When I went to visit them and put on a button-up shirt and got a haircut they were like, ‘Oh, are you seeing a boy today?’”

A couple of years later, Aaron discovered the Pitti peacocks whose classic style ignited a love for tailored clothing. Yet despite their foreign appearance, it was only after moving to Australia (a country better known for preferring Crocs over Crockett’s) that his perspective took on a more cosmopolitan character.

Whilst studying at the University of Monash, Aaron was introduced to Christian Kimber, whose relaxed and eclectic style became a major influence. “I was always interested in clothing but Christian had a more international perspective,” he says. “He took me to a whole other level.”

Aaron’s sartorial horizons would only continue to broaden.  After uni, he set off to Hong Kong to complete an internship but ended up serving a short stint at The Armoury instead. The decision profoundly shaped his thinking. “I learnt something from The Armoury called Sartoria Sportiva [roughly: sporty sartorial style]. So now, I always dress down my formal wear and dress up my casual wear.”

Then in 2014, after failing to find a pair of affordable peccary gloves, Aaron decided to make them on his own. Reaching out to a friend in Sweden, he sought out ateliers that could realise the high standards he envisioned for his brand, and eventually he discovered a family in Pecs, Hungary, who could produce truly artisanal accessories. Aaron explains that each pair of his gloves takes 4-5 hours to craft, involves 32 different manufacturing processes, and features extensive hand-stitching.

So with these sartorial slam dunkers in play Aaron is finally moving forward with his plans to include other accessories in his next collection. Pashmina scarves from Nepal are first on his agenda, and someday he’d also like to offer shoes. But the growth of the brand is modest, if not slow, when compared to the speed of the traditional fashion cycle.

Does the pace of the fashion system intimidate Aaron? He takes another sip of his coffee, leans back in his chair and gazes out the window. For a moment he looks lost in his own thoughts.

“I think like anything you know, it’s like at the beginning, it’s always hard because you have quite a lot of self-doubt. You don’t know if there are any customers. You don’t know if people will like it. But you know, after you get support from your friends and complete strangers you think, ‘You know? Maybe this is right and people will like it.’ That’s great motivation I guess.”

And if things don’t work out for him at least he’ll always have basketball. 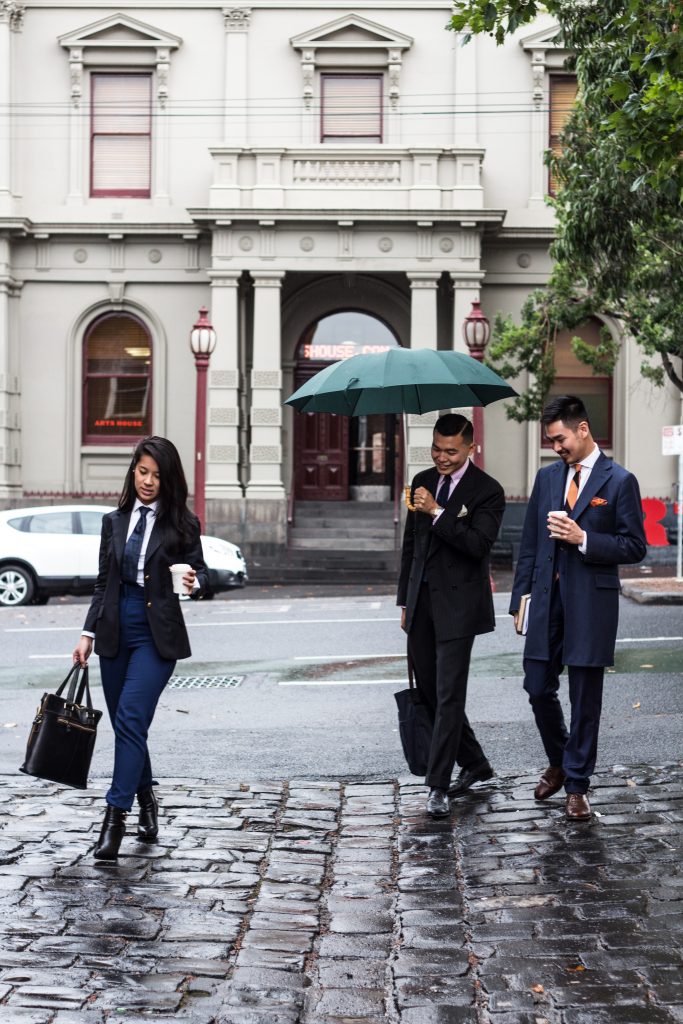