Alexander McQueen once claimed to have sewn “I am a c*nt” into the lining of a jacket made for Prince Charles. The story has taken on a life of its own in McQueen biographies, reflecting an irreverence for norms and authority that helped him carve (or rather graffiti) his name into the annals of fashion.

Like many other Stratford-raised working class teenagers, McQueen dropped out of school at 16, and sought work in London’s trades. Between 1984-1987 he apprenticed at Savile Row Tailor Anderson & Sheppard where he learnt to cut jackets, before serving as a junior trouser maker with military tailor Gieves & Hawkes from 1987-1988.

Although his career on the Row was short-lived, the experience influenced how he approached design the rest of his tumultuous life. In his collections at Givenchy and his eponymous label, critics lauded McQueen’s craftsmanship and technical virtuosity. McQueen himself openly acknowledged the importance of tailoring to his success (“Everything I do” he said, “is based on tailoring.”). Yet his output was a far cry from the solemnity of the Row. McQueen radically changed the proportions of the suit, and challenged the conventions of gender and male sexuality with an approach described by his friend and patron, Isabella Blow, as a mixture of “sabotage and tradition”.

McQueen’s iconoclasm is present even in his most conservative menswear collection: a made to measure collaboration with Savile Row tailor Huntsman. The pieces from the capsule are a sharp contrast (literally) to the Anderson & Sheppard drape-cut that McQueen was exposed to as an apprentice. By removing fabric from the back blades and narrowing the shoulder, he aimed to elongate the male body. He used longer coat fronts, slightly flared skirts, and backs that erotically traced the curvature of the spine. “To me,” declared McQueen, “the bottom of the spine [is] the most erotic part of anyone’s body, man or women.”

Notably, McQueen’s fixation with the spine rejects the traditions of English tailoring. By focusing on the spine, McQueen emphasises the garment’s side profile so that the silhouette accents the body’s erogenous zones, instead of disguising them. “That way I get the worst angle of the body,” he explained to Domus magazine in 2003. “You’ve got all lumps and bumps, the S-bend of the back the bum. That way I get a cut and proportion and silhouette that works all around the body.”

McQueen further deconstructed the suit by moving its eroticism from a male to a female register. He emphasised the torso’s sinuousness by lowering the lapel gorge, extending the skirt, dropping the pockets, and narrowing the button stance. In doing so, he encouraged the eye to trace the body downwards toward a traditionally female erogenous zone: the buttocks.

McQueen similarly fetishised the crotch with his S/S 2005 collection “Texist”. As with his Huntsman capsule, he created vectors that draw attention to the male pelvic region. This is seen with the low pockets, extended rise, and oversized fly seams of the cargo pants in look 35 [below left].  A zippered groin protector from look 27 [below right] is more explicit, accentuating the crotch with sadomasochistic overtones.

The suiting from McQueen’s A/W 2010 collection expanded on his queer view of the male body by focusing on its muscularity. Even more fitted than his Huntsman suits, they featured higher armholes, narrow sleeves, drainpipe trousers, and wide peak lapels. McQueen also used a pagoda shoulder to express youthful athleticism. Starting from the base of the neck and ending at the tip of the shoulder, the pagoda shoulder swoops gently downwards into a shape resembling a pagoda rooftop. The effect is a raised and extended shoulder line that maintains a slim profile, while also tracing the sensuous incline of the trapezius muscles.

But McQueen always notably drew on the dual influences of tradition and modernity. His A/W 2009 collection explored physiques that built on his knowledge from Savile Row while making references to the suits of teenage Mods from the 60s. “The construction and architecture of the pieces employ the core technique I learned during my four year apprenticeship on the Row,” explained McQueen. “You have to fully understand the construction of the clothes before you can fully manipulate them. What I’ve done is to take these traditional techniques and inject modernity.”

These constellations of contradictory themes define McQueen’s oeuvre. Balancing respectability and sensuality, masculinity and femininity, maturity and youth, tradition and modernity, the tensions in his garments continue to fascinate critics long after the designer’s death.

Part of the attraction, I suspect, lies in reading these tensions as reflecting those of the troubled designer himself. “My collections have always been autobiographical,” McQueen confessed. “A lot to do with my own sexuality and coming to terms with the person I am. It was like exorcising my ghosts in the collections. They were to do with my childhood, the way I think about life, and the way I was brought up to think about life.”

I doubt that McQueen ever exorcised all his ghosts given his tragic suicide in 2010. What I don’t doubt, however, is that the cockney-boy from the East End was a rarity in fashion: a technical genius who gave the middle finger to convention, who celebrated sexuality at the fringes, and who realised that Prince Charles was indeed a c*nt. 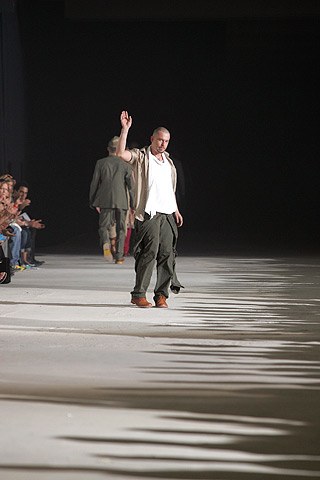 Alexander McQueen is available in Australia via Harrolds and worldwide via AlexanderMcQueen.com/au.