At the end of WWII, Italian immigrants arrived on Australian shores bringing with them their cuisine, their families and their coffee. Pino Carbone however brought something else. 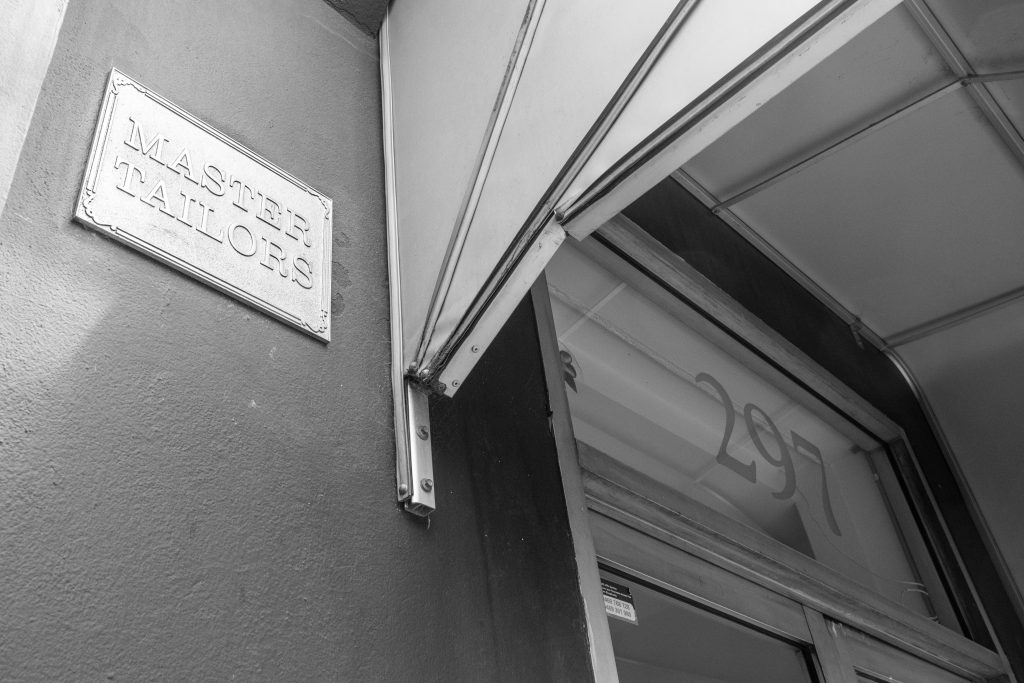 Smuggling sprezzatura in his jacket breast pocket Pino opened a small sartoria in 1954 on Lygon Street, Melbourne. With barely any understanding of the English language (and even less of Australian food), this was how Pino and his wife decided they would begin their new life.

As the Carbone famiglia grew so did their business.  It wasn’t long before Dominic, Pino’s son, followed in his father’s footsteps when, with shears in one hand and threaded needle in the other, he made his first suit at the age of seven. Though a lot has changed since then, one thing hasn’t: the Carbone team, today comprised of Pino, Dom, and Dom’s wife, Kellie, still runs seamlessly.

Stepping into the sartoria you’re greeted by old pictures documenting Pino and Dom at their craft. Black and white pictures line the walls, hanging with reserved dignity alongside sepia photographs of the establishment and swatch books. We were so enraptured by the photos that we barely noticed Kellie’s entrance.

Following her into one of the consultation rooms, Kellie invited us to sit and offered us coffee, a gesture too kind to accept at first but one this group of millennials couldn’t refuse. Slightly musty, the showroom reminded me of my neighbour’s house where Mario and I played Grand Theft Auto III as kids while our parents talked about how we were performing at school. 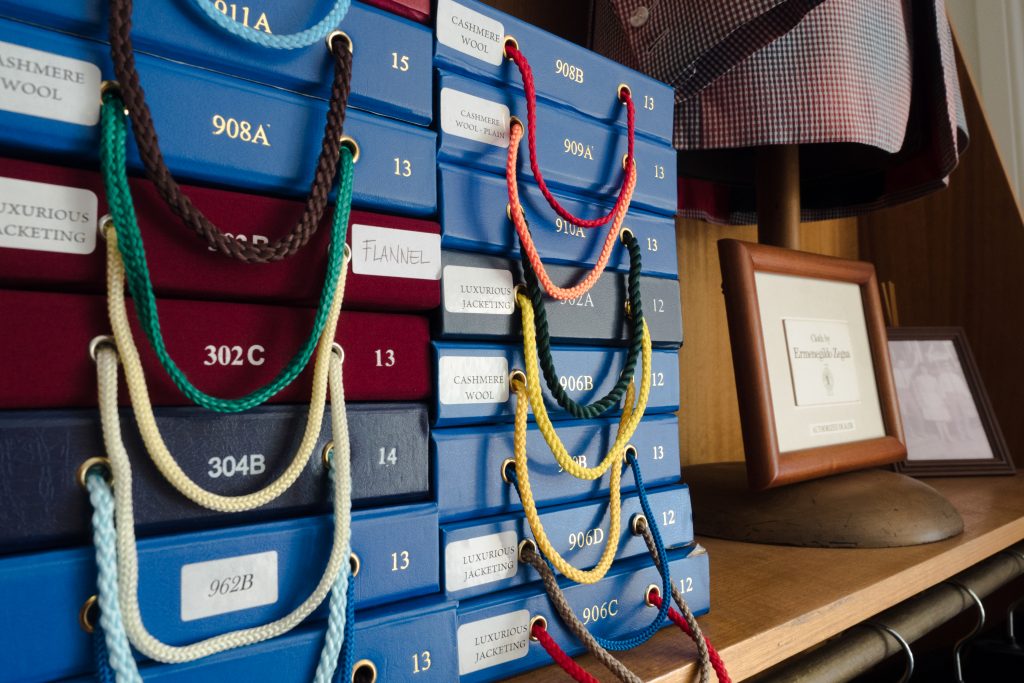 As we waited in anticipation for a cup of Italian coffee, I couldn’t help but investigate the fixtures around the showroom. Scabal was a name that I’d rarely seen around, yet swatchbooks of their wools, cashmeres, and mohairs sat on the shelf, wrapped in unembellished blue leather covers; the stuff of legends for legends. Kellie returned with sweets and pastries to accompany the coffee and set the food and drinks in front of us, gesturing us towards the couch. She perched on the edge of an arm chair, blue eyes piercing as we composed ourselves for the first question. 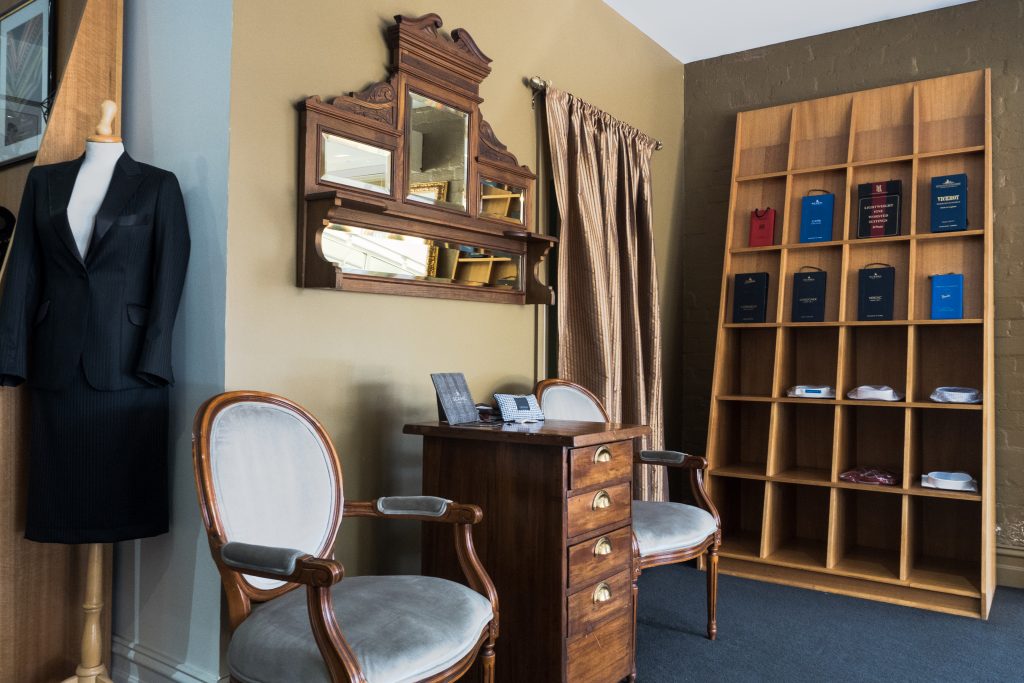 Before long though we were moving through red velvet smoking jackets and ivory dinner suits that hung on display. Kellie was the consummate curator, guiding us through living pages from Apparel Arts magazines. Making our way around the showroom, we arrived at a light grey windowpane jacket, sitting high on a wooden fixture. At first glance, the jacket seemed unremarkable especially among the gaudier garments on display. But my gaze was caught and pulled back when I noticed a standard of pattern matching I’d previously only ever seen in borrowed tailoring manuals and on Instagram. “To be able to pick that up is important,” Kellie explained, “It’s not an easy job [to do].” 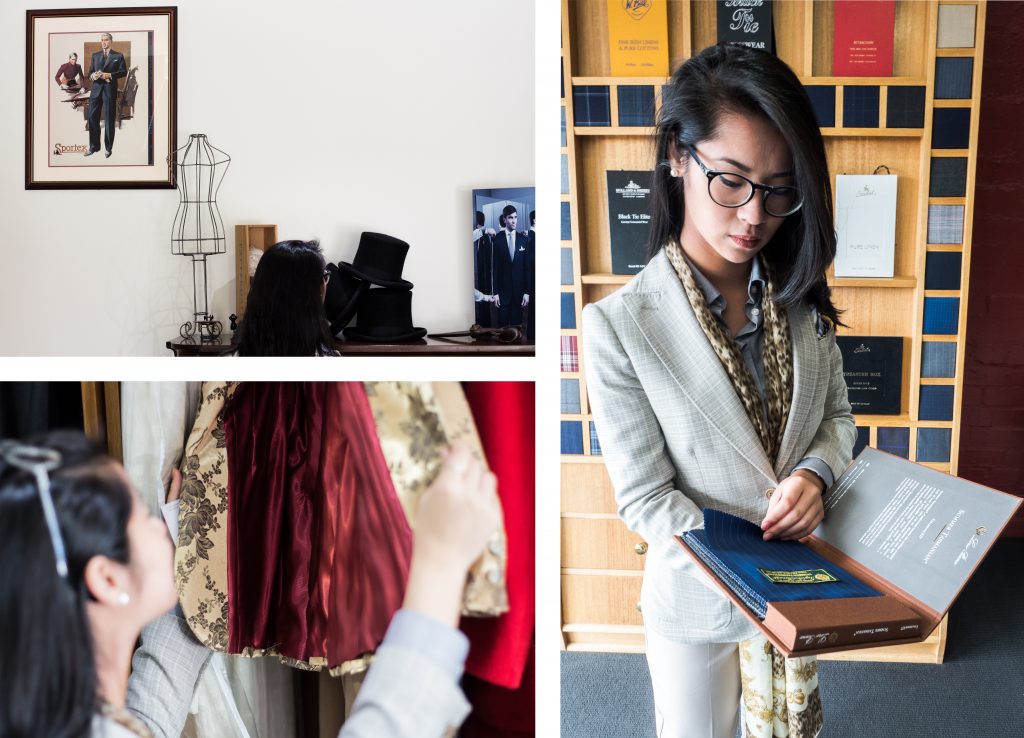 And easy would be the last word I’d use to describe the operation. To keep the pattern consistent, the tailor must cut the fabric at the correct place on the loom, as even a centimetre of difference can cause a misalignment. Much like a guitarist interpreting a classic with their own distinguished style, each tailor has their own stylistic method for sewing the excess away by hand without the sterile, straight lines of a machine.

Hand sewing is paramount to the success of pattern matching, allowing greater control of the fabric and seam, especially when bringing the jacket pattern back to its original size to match the lower quarters. Involving a delicate yet complex balancing of function and aesthetics, pattern matching is but one of many processes that (to get just right) requires a human touch. Most companies that make ready to wear garments aren’t able to offer the same luxury, even those at the top of the game. 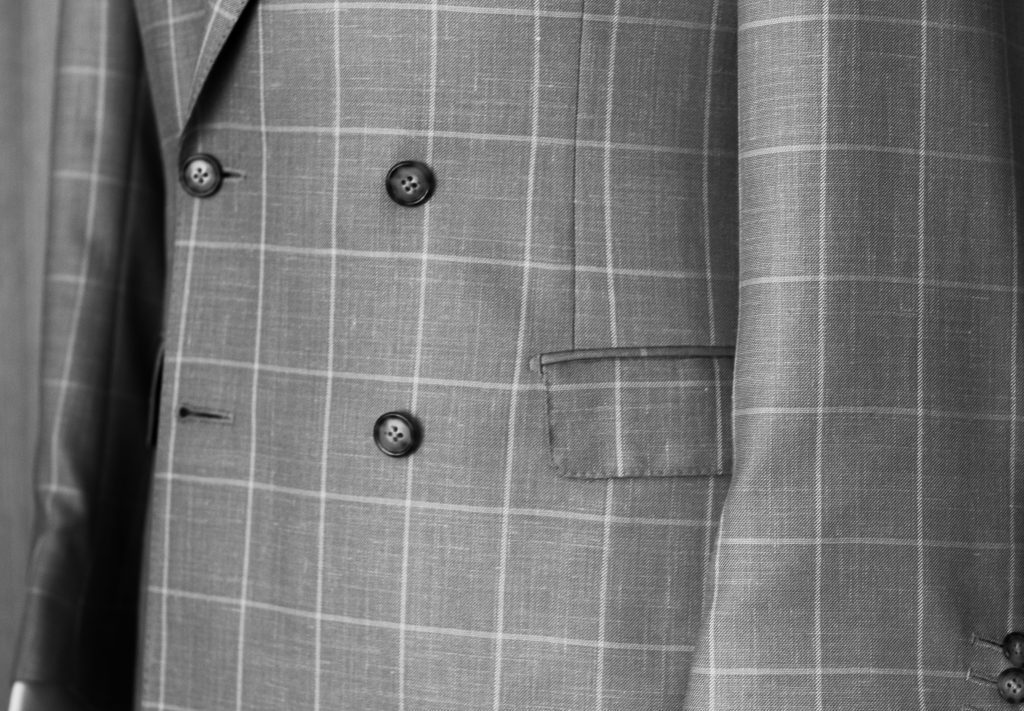 But like Italy’s best sartorias family is at the heart of the business. Everything at Carbone is made in-house; the jacket is made by the same person that you shared a drink with in the initial consultation, and every running stitch, button sew, and end knot is made to a measured specification, checked by a set of eyes and finished by a pair of hands that you shook. The result is a suit that is neither entirely yours nor theirs: it belongs to both. 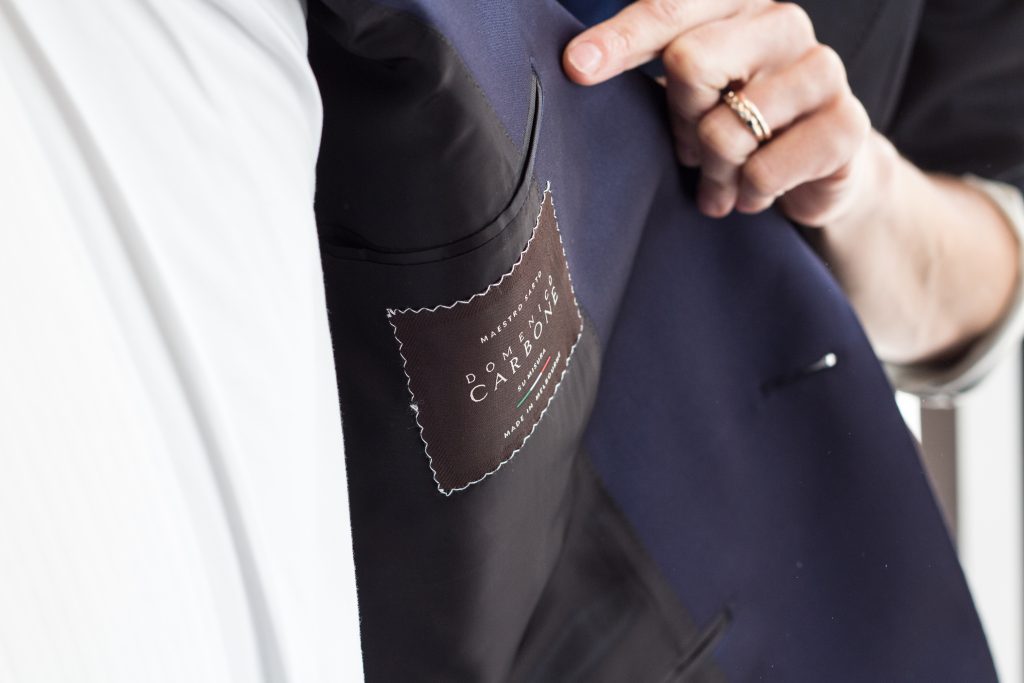 Therein lies the inseparable ties that bind the old ways and the new. At Carbone Tailors, one cohesive unit performs the measuring process and initial consultation, and labours the suit down to its final iron and steam, making Pino, Dom, and Kellie as intimately involved with the suit as I am with halal snack packs. “We can do all the styles [from the] 60’s, 70’s 80’s, and 90’s.” Kellie explains. “You could have anything for the lapel. Anything is an option, but it has to suit the individual.” Building on decades of experience, creating a suit with Carbone is only limited by a lack of imagination. “If you dream it up, someone can create it for you.”

Yet bespoke has been pushed into a strange position in the market. Where wearing a tailored garment was a sign of respectability merely a decade or two ago, fashion today finds the vast majority accessing and purchasing clothes that hardly require the expertise of a tailor. 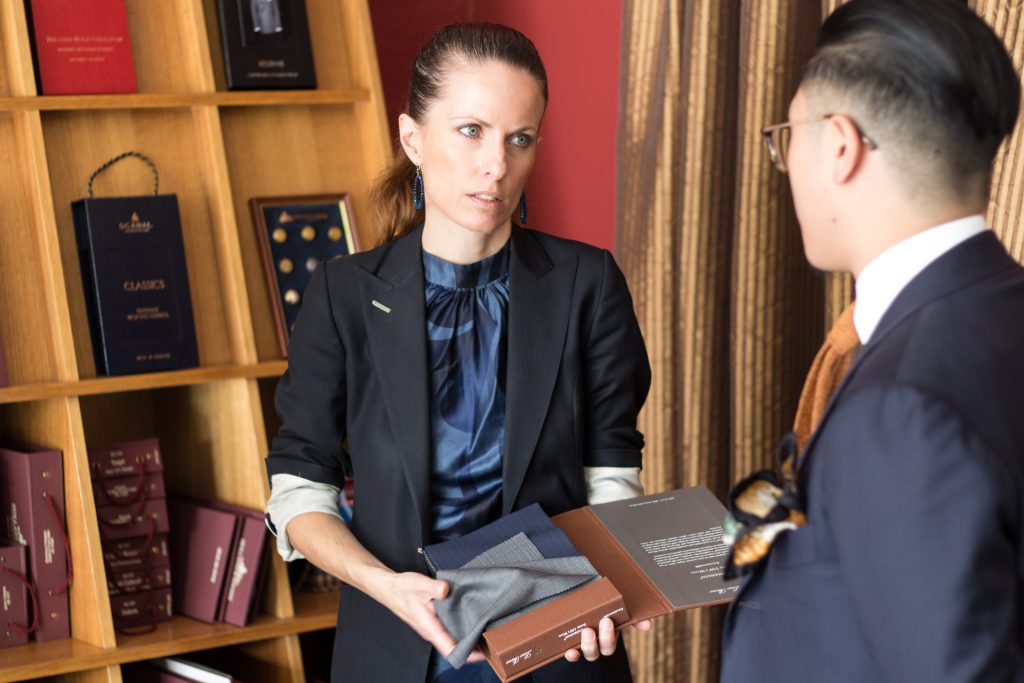 But not all hope is lost. Kellie seems convinced that people will return to bespoke. “It’s turning full circle.” Kellie says. “People are looking for quality.” And by creating garments imbued with spirit for over 60 years the famiglia has only continued to embrace the value of craftmanship.

In fact, even Dom’s and Kellie’s fourteen year old son and eleven year old daughter are starting to show an interest in their father’s work. “Just the other day, he did his first cutting,” Kellie says speaking about her son with a quiet pride, “and my daughter’s got some freaky mind for it too! She’ll grab a piece of cloth and drape it over something and it’ll all be balanced.”

When I was her age, I dislocated my elbow while trying to do a wheelie. 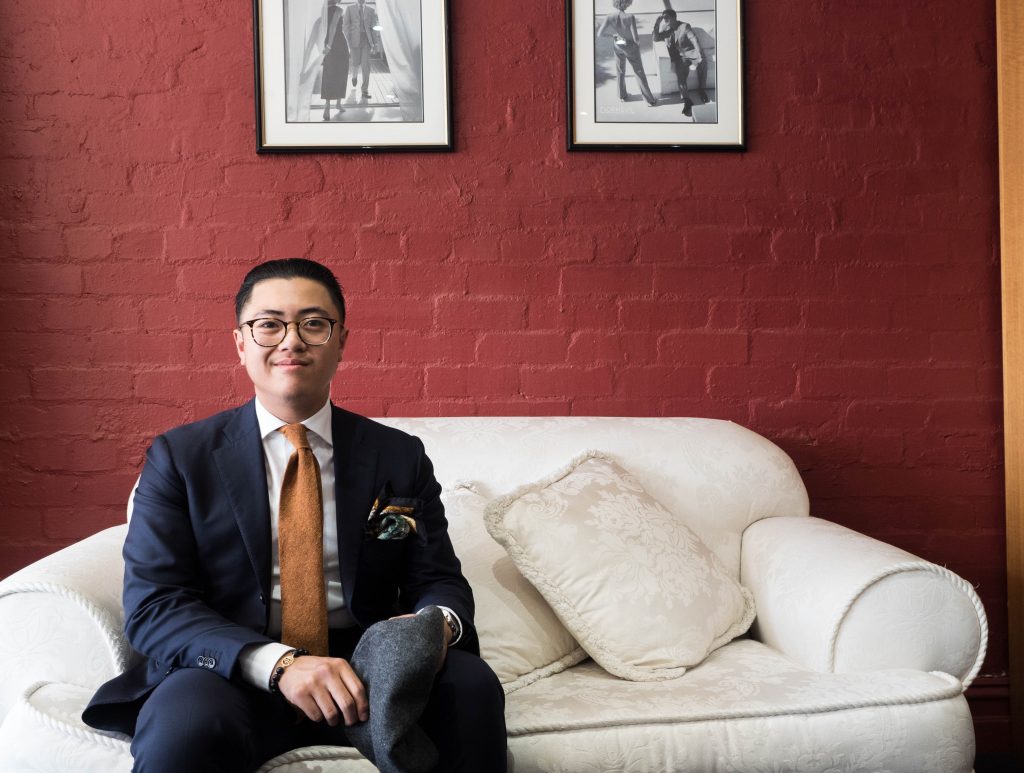