Burwood, a quiet suburb in Sydney’s Inner-West, hides one of the most stylish custom clothiers in the city.

Despite a name that is vaguely reminiscent of a fictional fast-food fried chicken chain from a popular television show, Herman Bros & Co. is anything but obnoxious, kitschy or a front for meth distribution. In fact if any comparisons can be drawn between the two it is that Herman, resembles the owner of said chain, Gustavo Fring, in his careful attention to detail, intellect and patience.

Quiet grace describes Herman’s personal style as much as it does his personality. When the boys and I first met him he was dressed in a single breasted, dark-grey windowpane flannel suit, and a rust and navy shantung tie; an outfit that reflects a man who is comfortable enough with himself to understand that dressing well is more often than not a matter of less is more.

However Herman didn’t always dress with the intelligent restraint of a modern day Beau Brummel. “I’ve always liked dressing, but when you’re young you never really think about it.” Herman tells me with a smile. “I started off buying my first suit in Chatswood when I was in Year 12 at this old menswear shop which stocked way out of season Hugo Boss and Zegna suits. Years later I walked into Herringbone and I met this guy called Ethan (Ethan Newton of The Armoury) who showed me a few things which just cut the thinking of putting brand first, and made me focus on what I was actually buying: fabric, craftsmanship and service. That’s why a lot of my suiting is simple and understated but features details and finishes that are noticeable, even by someone who doesn’t know anything about menswear.”

Herman’s inherited sartorial philosophy of understated elegance is embodied in his graceful Neapolitan inspired house cut: 2.5 buttons, 5 kissing functional sleeve-buttons; full-canvas, spalla camicia shoulders, horn buttons, and trousers with a side strap “because it is functional and easy to wear, not just because it’s fashionable”. Inspired by Herman’s travels in Europe and his experiences with Southern Italian tailoring, the result is a minimalistic and practical silhouette that reflects the dynamic Australian climate and attitude towards dress. Case in point is Herman’s affinity for the Neapolitan spalla camicia, a pleated shoulder head that is free from the inhibiting weight of heavy excess padding and which provides an increased range of movement that perfectly satisfies the active lifestyle needs of the contemporary Australian.

However Herman’s house cut only acts as a starting point: there are more risque options available for the more particular clientele which a quick peruse of his commissions rack will attest to. As an example, Herman explains the story behind an eccentric grey sharkskin that David examined. “This customer provided me with a  bound document which specified a single button on the jacket sleeve; didn’t want pick stitches on the jacket; wanted a straight cut bottom; didn’t want any inner pick stitching; specified the lapel width completely; wanted a besom breast pocket. On the trousers he wanted a particular angle of the front pockets and a particular size to the front tab. He was inspired by something he seen on film (Michael Mann’s Collateral) so he wanted something which was quite specific.”

The degree of customisability that Herman offers has more in common with bespoke tailoring than your average made to measure custom clothier. Instead of altering blocks (pre-cut templates) to fit the proportions of his client body Herman’s tailors cut a new “individual model pattern”. This process requires a far greater number of detailed measurements (up to 28 measurements in total) without the aid of master garments and allows Herman to accommodate physical peculiarities. Since the silhouette of the jacket the first thing we notice, the delicate and numerous particulars of fit which Herman addresses through his process is an impressive point of difference especially if one has sloping, dropped shoulders or square shoulders like Mike. The prices that Herman charges for his garments are bloody remarkable, with entry-level semi-canvassed options starting at $675.00 with a turn around time of around 5-6 weeks.

In Herman’s showroom above his suiting commissions, hangs framed specimens of his shirting which like his suiting, showcase an unheard of level of detail and hand finishing at a price point that is more than competitive.

Herman’s shirts are cut from a new individual model pattern like his tailoring and feature hand finishing achieved through traditional, time-honoured techniques that encode his sartorial philosophy. The buttons are attached by hand by Herman’s tailor’s using a “chicken-foot-stitch”, a three-point stitch featured in traditional Neapolitan shirts, instead of the regular X cross stitches found on many ready to wear garments. On the underside of the collar and standard on all of Herman shirts, is a triangular tab attached by hand that ensures that the collars always remain in contact with the shirt front. Herman’s also eschews plastic buttons in favour of superior mother of pearl, which add a subtle old-world lustre to his shirting that is sure to make connoisseurs break down like Daisy Buchanan.

But it is the finishes that nobody else but the wearer is privy to which really make owning a shirt from Herman Bros. and Co such a personal experience. With around 15 options, monogramming on the lower left chest on the pocket (or more discretely, inside the collar band) allows the wear to tastefully stamp their individuality on their garment. Most significantly, Herman offers the option of replacing the collars and cuffs once they become too old or frayed. The practice is a throwback to a sartorial golden age when people like John Rockefeller sent in their favourite white poplin to their tailor for reconditioning.

Despite the influence of tradition on his work, Herman is keenly aware of how important it is to always keep one eye on the future, the other firmly on the past and his mind on the present:

“It’s probably the worst time to start something like this.” Herman admits referring to the saturation of the tailoring market. “But when some of the first suits came back and I felt how comfortable they were and saw how similar they were to jackets that I paid two-three thousand dollars for I started to believe that there was something here that makes it worth pursuing. There’s a joy when you nail the subtleties that go into measuring each body and creating each garment which make it risking what I already have for something else. My wife’s very supportive. When I made my first couple of suits she said “Wow! This is amazing. There’s really something here”. I feel the same way.  My parents don’t understand of course *laughs*.” 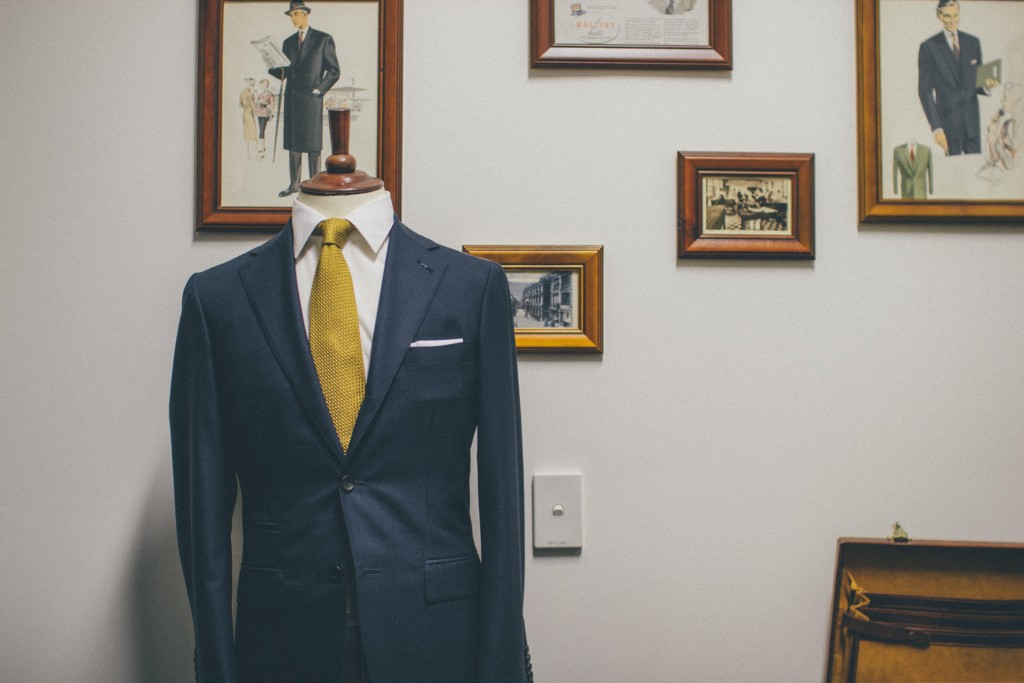