Oscar Hunt Tailors, the respected made-to-measure tailoring house in the heart of Melbourne, are the city’s sartorial Backstreet Boys: cool and collected dudes who never seem out of reach.

Still, I was probably the most nervous one out of all of us when The Hounds flew down to Melbourne. But chilling with Chris Edwards, the surfie co-founder and current company director, my worries were alleviated when I discovered what pushed Oscar Hunt to the forefront of the Melbourne tailoring scene. Inviting us into his tailoring workshop, shoving aside piles of cloth for our drinks, and bringing over some stools Chris recalled his journey to India and the made-to measure experience which shaped his vision for Oscar Hunt:  “The service is what really got me: the fact that I was with him for an hour as opposed to retail where you walk in and it’s like ten minutes tops. Nobody is spending any time with you, it’s quickly done, they sell you something and then you need to get out. So I love that kind of service element to it. I got to know this guy and he got to know me. And he was able to make a suit with my DNA in it.”

It came as no surprise to me that Chris has always been the “suits guy”. Even as a kid he had a large wardrobe, which has grown to an alarming 63 suits today (all insured as his largest asset). But everyone has to start somewhere. Chris’s earliest sartorial memories revolved around the old man who ran the local suit store, Lionel, from whom he bought his school formal suits. “Classic old store in Elsternwick, out in the suburbs of Melbourne,” Chris recalls with a smile. “It had this really heavy sort of floral pattern carpet, it smelt like you walked into your grandfather’s house with that musty smell. You know it was a really old school establishment because there were no prices in there. But I’ll always remember those experiences as well, and the relationship [we] had and I really enjoyed that.”

Though Lionel’s influence is undeniable, if it weren’t for Chris’ father, a salesman who mums, dads and small businesses trusted with their livelihoods, Chris may never have become as interested in looking sharp as he is today. “He wasn’t doing anything innovative or pairing difficult patterns with pocket squares. He just knew what looked good on him. He just looked effortless. I think that’s what I remember about dad’s style the most and I think now I’m kinda getting there. It helps having a tailoring business.”

The tailoring business isn’t just helping Chris however. Beyond the showroom, Oscar Hunt offers a travelling tailor service run by Jules, who personally meets clients at work or at home for fittings. Chris explains that he and Jules were good friends pre-Oscar Hunt and did everything together in the beginning from PR and running events to marketing and business development: “In those early days it was just Jules and I scrapping day-to-day. Jules and I were unpaid for about 18 months…I had an old Nissan Pintara, where I masking-taped the roof because it was falling apart, you know. We used to deliver suits and have to park around the corner because we didn’t want them to see the car,” Chris laughs. “It was an organic start small thing. We weren’t the best in terms of the showroom, or website, we didn’t stock the luxurious fabrics as we do now, but we always tried our hardest to deliver the best customer experience, and if they needed anything we would try our best to get it to them.” 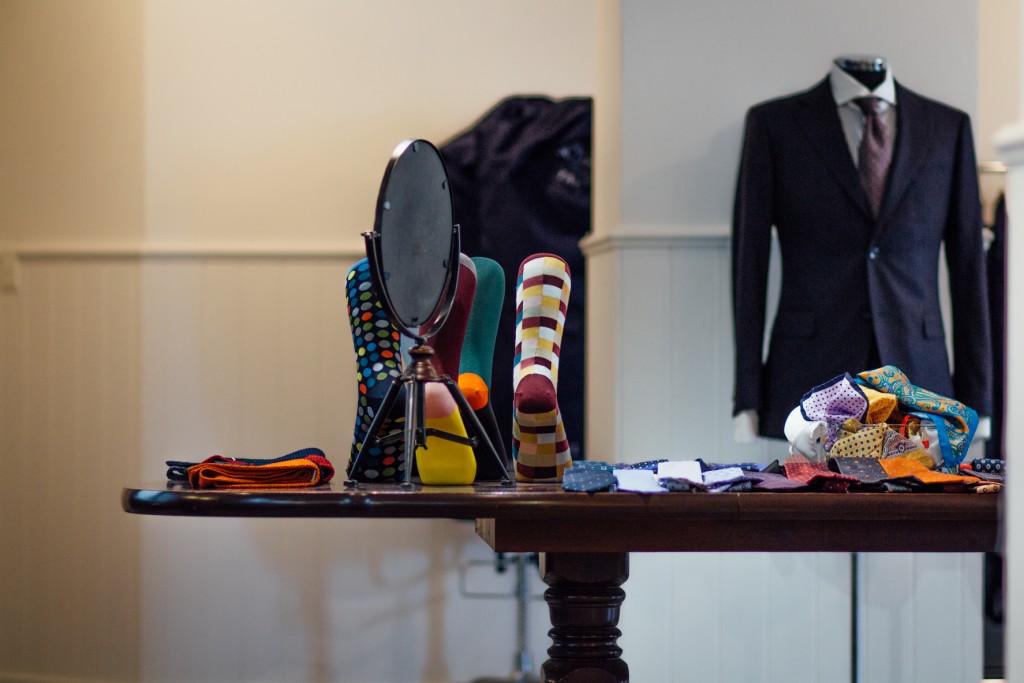 Despite their more than humble beginnings it seemed that something was working. By mid-2012 Chris and Jules realised that they’d reached a point where they were unable to take on all the clients waiting at their door. “In the early days, it was all our friends and family, once we broke out of this circle of friends and family, we could tell that we were doing something right,” Chris explains. From there, it wasn’t long before others joined the boys on the Oscar Hunt journey, including Jared Acquaro, Lachie Watson, Steve Barkla, and of course the bespoke tailor, Oscar Hunt himself.

But as the team grew, it soon became apparent to Chris and Jules that they needed an office a little larger than the back seat of their Vitara. Starting off in a little spot in The Hotel Olsen, the boys swiftly moved into a showroom on McKillop Street, before settling into their current showroom on Hardware Lane, a fit-out inspired by the 19th century tailoring havens on Savile Row. “When we launched the business, we actually flew out our tailor to The Hotel Olsen [to do fittings]. We used to have a side cart of drinks (obviously on a very tight budget) and when we moved to McKillop Street, we put a little bar in there too. It’s like a little tradition.”

And even though we forgot to steal some alcohol from the bar in their current showroom, it was a beautiful thing to behold: an amber mural spread of whiskeys and rums against pearl-white walls, which even a non-alcoholic would appreciate. The tranquility I felt whilst wandering past the open bar and lightly grazing my hand against the suits on vintage timber racks evoked images of a jazz bar at Disneyworld which is surprising given the building’s history: “This place used to be a 30 person corporate office, it had a low ceiling grid, carpet on the floor, just nothing you’d want in a tailoring studio. So we got in here and ripped it up. It was a lot of hard work, 5 weeks to build, a lot of late nights, and a lot of dodging the council,” Chris laughs. “No, it was a good journey. I think when you come up into this space, you don’t really expect this. But it really is something that you’ve sought out and come here for, so it should be worth it.”

Clients aren’t the only ones making journeys however. Oscar Hunt’s fabrics are sourced from the world’s best mills including Dormeuil in France, Ariston and Solbiati in Italy, and Huddersfield and Porter Harding in England to name a few. But it’s the softness of their English-Italian hybrid house cut which is key: “I think with us, we have a bit more structure [than Italian tailoring]. We use a really thin kind of pad but it’s well structured through the shoulder, and we use a floating canvas but a light breathable one. We show silhouette through the waist but really, the shoulders and chest is where the battle is won and lost.” It is with this hybrid cut that clients get the best of both worlds: a sweet drape that is comfortable even in the most unpredictable Australian weather. And as usual with made-to-measure tailoring, there is always some apprehension from the client about what to choose, but of course, the extremely experienced and well-intentioned fitters resolve this by getting to know their clients like mates. “We give those little bits of recommendation, so whilst it’s still all the customer’s choice, we’re talking through these things so the client knows. The worst thing you can do is ask, “what size lapel do you want?” or, “where do you want your trousers to sit?” You come here for a great suit and it’s our job to make that happen.”

And whilst their English-Italian hybrid house cut is integral to the Oscar Hunt name and though they continue to grow, with a second showroom having recently opened on York St in the heart of Sydney’s CBD, the same ethic that Chris and Jules had in their Pintara days, still pulses through the Oscar Hunt veins. Expanding their vision of great fit and impeccable customer service, Chris and his team now endeavour to navigate the sartorial reefs of Sydney with their conquest of Melbourne’s fashion shores. And though Chris is probably spending his spare time tearing up the waters of Manly with his surfboard, without a doubt, you’ll find me spending mine at Oscar Hunt. 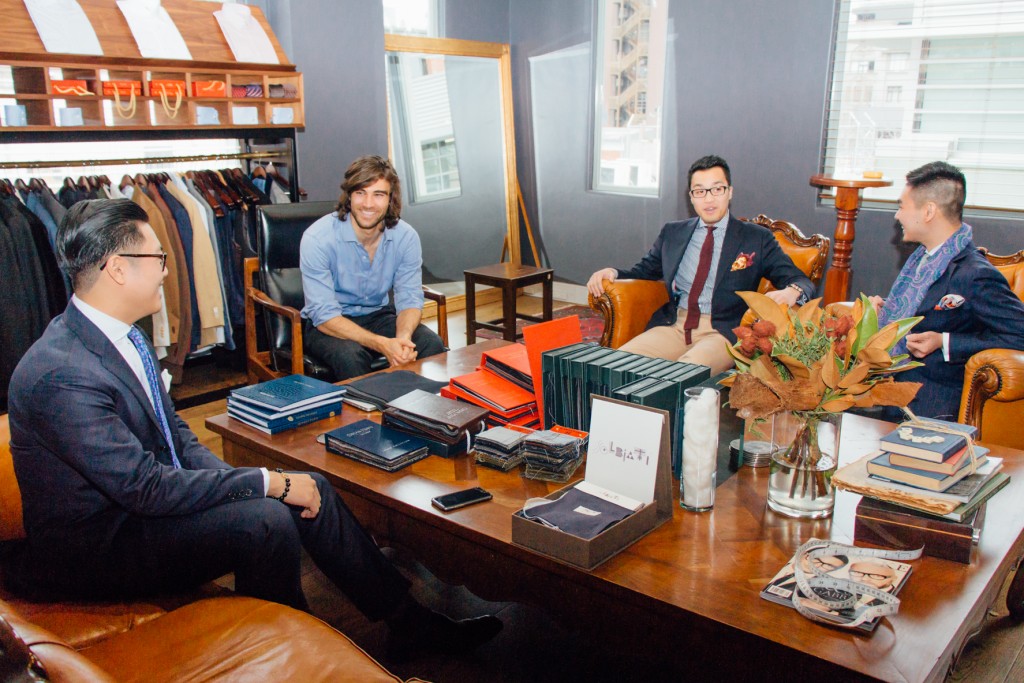