We visit Tom Riley of P. Johnson Tailors on our search for the Australian sartorial identity

What is the Australian sartorial identity? In Japan, meticulous attention to detail, reminiscent of OCD, produces a jacket of pure precision. Fly over to Italy and you’re slapped in the face by sprezzatura and the beauty of calculated imperfection. It’s foolish to claim that these approaches are homogenous within each respective country, but it is something that stands out. We’re harder to place.

Rewatching Gallipoli (1981) I catch a clue to answering my question. As an underage Archy Hamilton and a cynical Frank Dunne cross the Great Sandy Desert to enlist in the Light Horse, Archy sports a deconstructed single-breasted cream blazer with patch pockets appropriate for the hot weather conditions and the earthy tones of the Australian landscape. Visiting Tom Riley, director of P. Johnson Tailors, I catch another clue.

He appeared from the kitchen wearing a beige, unstructured jacket draped over the popped collar of a peanut butter coloured rugby sweater as he carried a tray containing glasses of water. Placing the tray down on the table, a smile emerged from Tom’s dark toffee stubble as he settled into the opposing sofa, and lifted his fingers to adjust the round, tortoise shell spectacles that had slid slightly down the bridge of his nose. Perhaps the warm lighting added to the effect, but Tom reminded me of a mate I had in primary school who would share his fairy bread because it never existed on Mum’s lunchtime menu.

Despite his youthful looks it had been exactly four weeks since Tom got married at a beach club on the Italian island of Capris. Held in the evening, it was a small procession with seventy-five people who watched as his now wife, walked down the aisle to meet Tom dressed in a double breasted navy de-con suit, poplin shirt and a navy-white block stripe tie. The location couldn’t have been more suitable in light of Tom and Patrick Johnson’s, Tom’s best-friend and business partner, passion for modern lightweight tailoring. 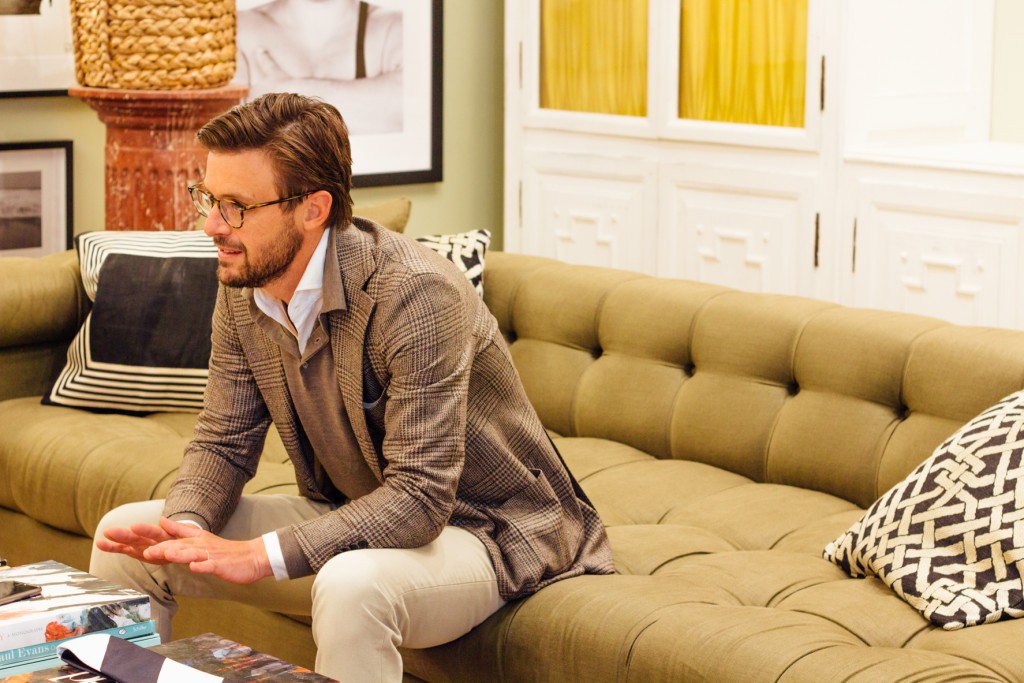 Inspired by the Southern Italian la bella figura, P.J.T suits don’t feature the same construction elements typically found in tailored English garments. Compared to the regimental silhouette ubiquitous in Australia’s CBDs their suits are softly tailored: linings feel imperceptible if present at all; internal canvassing is light; and shoulder padding is indiscernible if not straight up absent.

But the lighter internal structure doesn’t compromise the integrity of the garment. Enlarging the silhouette slightly, narrowing the waist and adding chest darts, achieves shape without sacrificing comfort. A gently rounded sleeve head and the option of a Neapolitan shirt shoulder also removes the need for linebacker sized shoulder pads, while also establishing an organic profile that hints at the contours of the body beneath the cloth. 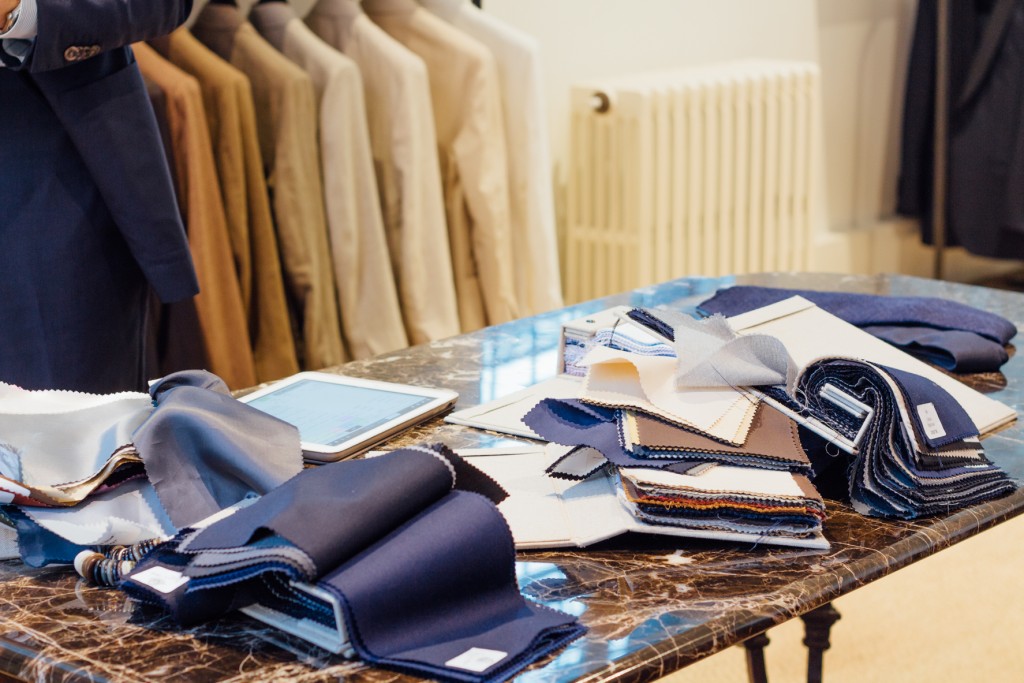 Given their reductive approach to construction, it is a fabric’s drape therefore, upon which so much of their suits’s appearances depends. When deploying the idiosyncratic fabrics preferred by P.J.T. including Irish linen, tropical wools, twill cottons, and lightweight merino, jackets appear to cascade down the shoulders and across the back, achieving a haphazard sophistication and romantic sensuality.

Tom enthusiastically compares selecting fabrics and fitting suits and to his experiences as a vintage wine maker:

“Every day I’m balancing and composing elements. If I were wine making, I’d be doing the same thing. There’s an art in science overlay. You have strong artistic and abstract ideas mixed with the technical and they’re one in the same function. I used to walk around vineyards during the harvest period, about 120 different blocks, and you’d have to taste every block whilst formulating a picture in your mind of what each of them look like, and then back in the winery you’d put them all together or keep them apart if necessary. So you’re trying to maintain quality and integrity at all times during the process.” 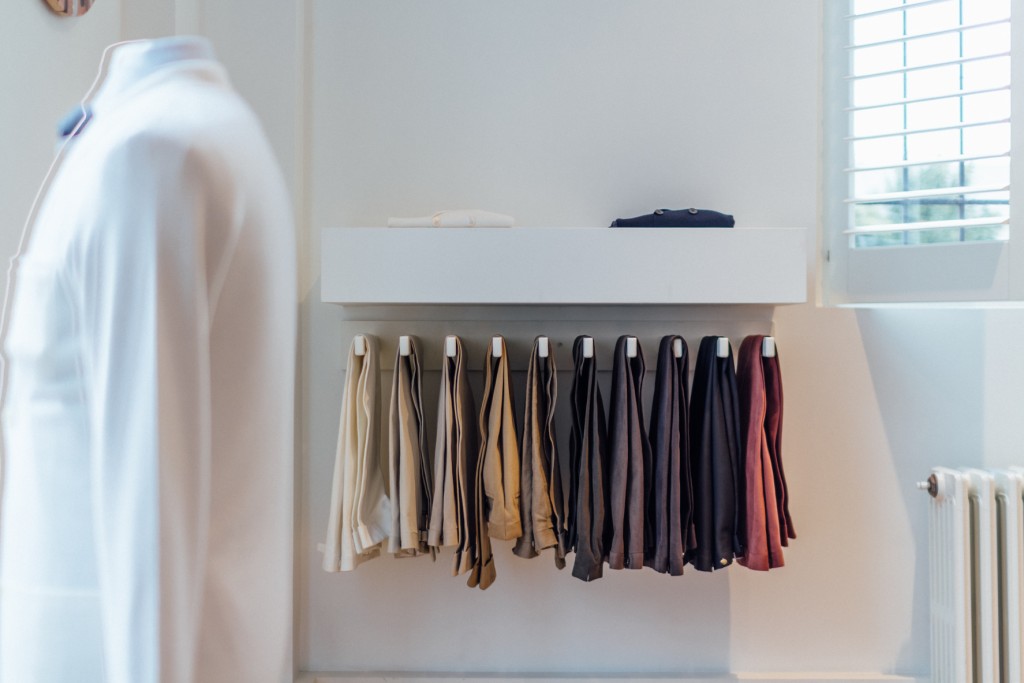 This reductionism and the debt P.J.T. owe to the Italians might seem like sartorial treason against the tailoring traditions we’ve inherited from the British. However there’s an athleticism present in the cut of a P.J.T suit that’s absent in both. In other words, the suits look more at home with a pair of sneakers and loafers than oxfords or brogues. Like Boccioni’s Futurist sculptures, a P.J.T suit is a celebration of the effervescence of motion and progress.

Winning the Regional Finals in the International Woolmark Competition was a great step forward for P. Johnson, inspiring them to reinvigorate their relationships with their weavers. A piece of innovation which emerged from these refocused relationships was a double-breasted, super 160, merino wool cardigan, with three patch pockets, that resembled a resort jacket. Indescribably comfortable, each fibre measured a delicate 15.75 microns. There are only six places on Earth capable of knitting fabric like this.

“This is from Zhi Nao, a Chinese yarn maker who works with wool lab and the Woolmark Company to produce the finest possible merino yarn for knitting,” Tom explained inviting us to feel the cardigan. “It’s quite a compact yarn but it’s for knitting and not for weaving. So it’s beautifully soft but still retains a lot of density.”

Sartorial identity however has as much to do with the way in which you hold yourself as it does with the tangible properties of clothing. Archy’s is defined by the nonchalant way in which he wears his jacket, running through the desert without thinking twice about fixing himself. Adding an emotional dimension to the cloth, it’s as if he was running in his pj’s (pun very much intended).

For P. Johnson Tailors it starts with the location. Treated as a destination to be, the Melbourne showroom is tucked away from the hustle and bustle of central city life, camouflaged by suburban residences. Wander inside, and you’re greeted with a minimalistic approach to the interior with pop culture photos and modern art including cheeky references to the father of Spatialism, Lucio Fontana, strong enough to put a smile on Will’s face. I’ll be honest it took me a while to get it. (Hint: “Tagli”.) 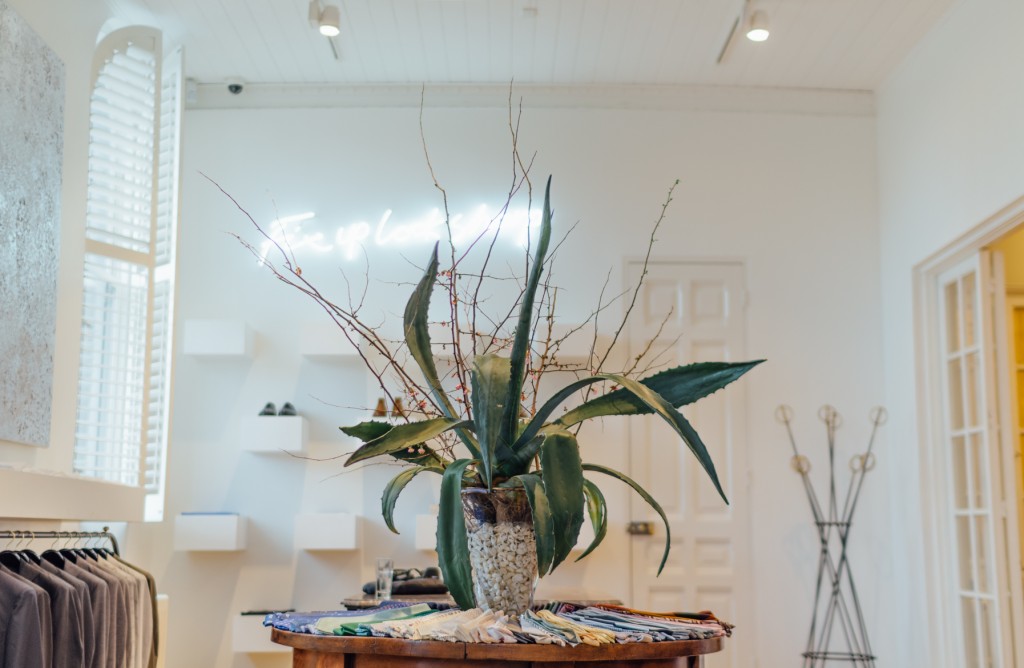 The showroom is a reflection of Tom and Pat’s vision for modern Australian tailoring as something that “shouldn’t be an intimidating process”. But its minimalistic appearance disguises their effort and hard work. In the first two years it was just Tom and Pat running around like mad hatters dragging samples into the homes and offices of potential clients, reaching out first to friends and family and going from there. Tom reclined back on the sofa for a second as he reflected on their sheer drive:

“We were mad hustler. It taught us the value of the client and how much it takes to really win a client and maintain that relationship…The most enjoyable thing about my job is when you can have a positive effect on your client.”

Those years were a far cry from their first meeting at the University of Adelaide, where they discovered a shared appreciation for oneology and dressing for themselves. Years later, Patrick’s allergy to sulphur dioxide, a preservative used in most wines, became an unprecedented silver lining despite the end to his career in winemaking. Compelled instead to invest 8 years under an esteemed shirtmaker from Savile Row in Mayfair, during which time Tom travelled two or three times a year to visit him, it was the first step to establishing the sartorial pioneer we see today.

When I asked him why he signed up for the journey Tom responded without hesitation:

“I had complete blind and utter faith in Pat’s passion. Plain and simple. That’s all it is.”

In today’s bottom-line driven retail market, it’s rare to find a company that treats its relationships as more important than its profits. Like Frank and Archy, Tom and Pat encapsulate the idea of mateship, toeing that murky line between best friend and business partner with ease and conviction. At the beginning of our interview I came in looking for the Australian sartorial identity. After wrapping things up, I’ve concluded that the answer is too fluid and dynamic to put my finger on after just one interview. The search for our sartorial identity is a journey, and as with Tom and Pat’s friendship, I have a feeling that whatever it is, it’ll feature a bit of seriousness and a bit of fun.