A chat with Trunk Tailors: Melbourne’s most progressive classic clothiers

It’s a public holiday in Melbourne, which means that Jack Liang and Homie Yang of Trunk Tailors ought to be at work. Instead the boys are spending their morning lounging outside an Italian wine bar on Hardware Lane — a small place only 100 metres from where we had breakfast with Jared Acquaro, 30 metres from Oscar Hunt Tailors, and just down the road from the Golden Monkey, a 1930’s Shanghai inspired bar within earshot of the trams on Bourke St.

The boys however don’t look out of place despite being twenty-something year old Asian blokes who dress classically Italian and who sound like guys ten years younger. “I could’ve told you I was fifteen and you would’ve believed me because Asian genetics,” Jacks laughs when I enquire about his age. And Homie isn’t shy about things either with his confession that he has to wear button-ups because he’s “too fat to wear t-shirts.”

Their irreverent personalities are also reflected in their taste in clothes. Jack’s most recent acquisition is a black tuxedo boasting 10cm wide lapels, a lining with tiger motifs and a composition tag that quotes the Italian playboy Lapo Elkann: “suits need to be sexy because we’re not talking about biscuits here.” Homie’s style on the other hand is notably nonchalant and today he’s dressed in a green linen number that has earned him reblogs on cult menswear Tumblrs like Steezy Asian Dudes. But appearances can be deceiving: the Trunk Tailors possess substance and style equal measure.

Menswear romantics might find this hard to believe. Their showroom located in an Art Deco building on Little Bourke St is a far cry from the luxury emporiums around the block. It’s a stark, spare space that resembles a designer’s studio — complete with clothes rack, standing mirror and a shelf of fabric books — more than it does the baroque mancave you’d expect. There are no photos, no leatherbound volumes and no antiquated wooden fixtures. There’s also no wi-fi.

Its modesty however can be attributed to the Italian ateliers the boys are inspired by. “I remember going to E.Marinella thinking it was going to be bawse,” Jack recalls of his visit to the legendary tie makers “but it was so small. Probably the size of this,” he spreads his arms to indicate the length of the café. “Maybe even smaller and you’d go in and there were ties everywhere. And that was it. There was nothing else.”

The Italian influence isn’t just reflected in their aesthetic – it’s also embodied in the quality of their garments. “It’s all handmade,” Jack informs me, running his finger over the top-stitches of a jacket collar. “You may not realise it now, but after wearing it for a while you’ll start to feel the difference.”

While mass-produced garments today are for the most part all machine stitched, clothing is always afforded superior drape and comfort when made by hand. Tailored garments in particular, which must curve and conform to the contours of the body, require a certain amount of ease to be worked into the stitching in order to drape naturally. This isn’t something that can be calculated by machine however. Tailors rely on trained intuition and years of experience to determine the right amount to allocate each stitch. The benefits of doing things this way isn’t just functional, it’s also aesthetic. A well-fitted handmade garment will appear to align itself perfectly with the human body underneath.

Machine stitching by contrast can look stiff and feel unnatural. Areas which curve and round off the body (such as the back collar, chest canvas and lapels) require gentle and thoughtful shaping from a tailor who must manipulate flat cloth into something that not only resembles, but also complements, the wearer.

Jack and Homie really appreciate these formal considerations. Inspired by Neapolitan tailoring, the boys strive to imbue lightness and comfort into their garments without ever compromising on quality. Their jacket shoulder, softly gathered into the armhole and without heavy padding, allows armholes to be cut higher without sacrificing mobility. The lighter chest canvas also makes jackets feel looser and more breathable and pleated trousers round out their fuller cut. “I like practical stuff like this,” Jack says of their designs. “At the end of the day if it isn’t practical no one’s going to wear it.”

Wearability is a big factor for the boys and lies at the heart of their aesthetic. Both of the boys are cyclists with extremely large thighs, making them incredibly discerning about fit. When Jack crosses his legs the extra fullness in his trousers becomes apparent and Homie, the larger of the two boys, is especially conscious of how well-fitted garments should look and feel. “I used to be like, head to Thom Browne,” he says recalling a past obsession with the designer’s shrunken suits. “But it’s just too much now”.

However the boys’s suits share one thing in common with Browne’s: their expressiveness. But where Browne’s suits are characterised by their firm structure, slim lapels and stylistic throwbacks to the 1960s, the boys’s suits are soft, nonchalant and reminiscent of the Southern Italian bella figura. Jackets feature soft shoulders, pleated Neapolitan sleeve heads and lighter chest canvasses; and trousers are high waisted, feature side adjusters and taper gently towards the ankle. It’s a style of tailoring that’s noticeably less regal than what we’ve become accustomed to in Australia but that’s a large part of its appeal. Their aesthetic retains suiting’s masculine pedigree without its severity. 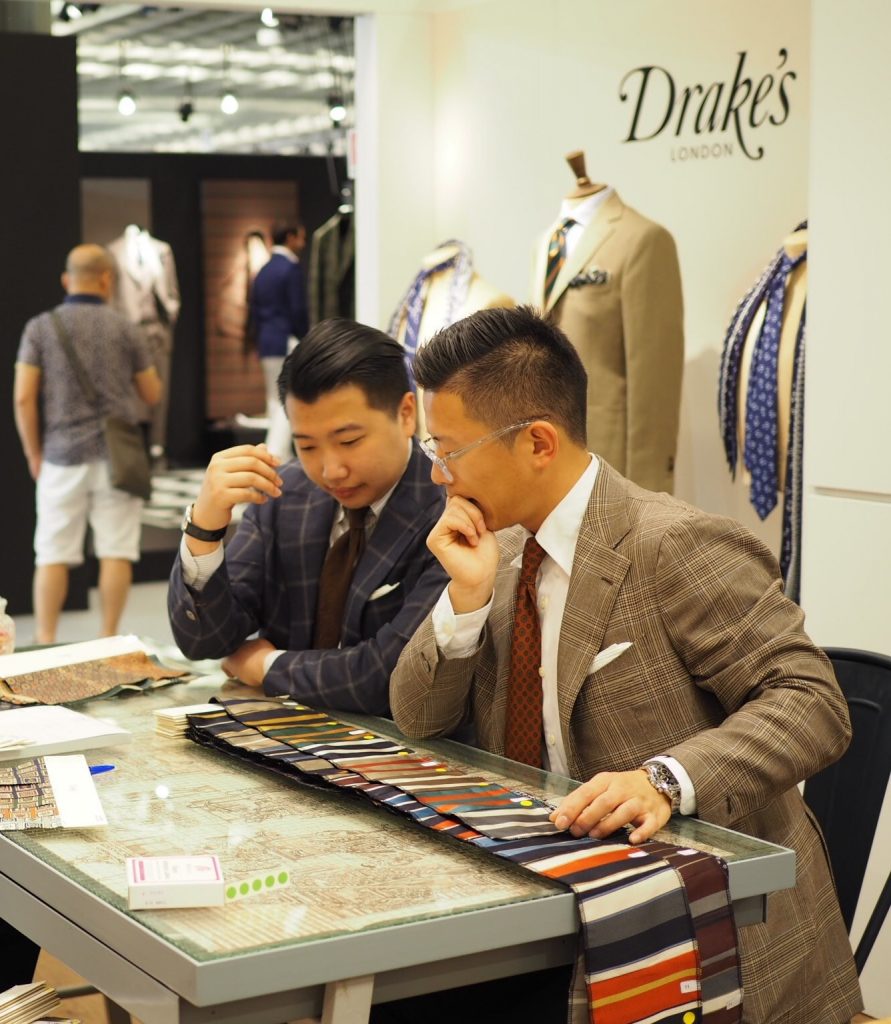 The Trunk Tailors method of pattern making, unlike most custom tailoring in Australia, also stands out as remarkably distinctive. In contrast to conventional made to measure, what Jack describes as “cutting from a single piece of cloth” is an approach to tailoring that falls somewhere in between made-to-measure and bespoke. In most made-to-measure processes, the pattern (the blueprint of any garment comprising its individual components) is pre-drawn to maximise economies of scale and to simplify fitting procedures. These base patterns are then adjusted after measuring the client to account for any variations between the physique prescribed by the pattern and the client’s own.

Still only so much can be done to a pre-established pattern before the balance of the garment is irreparably thrown off. Tailoring is as much a matter of engineering as it is of aesthetics, and every single adjustment made to the pattern requires making several others to prevent distorting the silhouette. The balance of blocks functions to the extent that making any significant changes may permanently compromise the garment. In other words, their fundamental shapes are fixed.

Contrastingly, the more labour intensive process used by the boys pays homage to the high standards of Italian craftsmanship, and allows the shape of a suit to be changed almost completely. After collecting individual measurements during their initial consultation, the boys send off their body data to a master tailor in Hong Kong who works with a cutter to hand-draw a pattern from scratch. Consequently, details which aren’t usually touched by your regular clothier, like the gorge placement, lapel gradient and waistband height, can be adjusted and other features like a self-belt, internal safari pocket or turn-back cuff can be easily added to any commission. And the process is as extensive as it is intensive: the boys complete three fittings (including a basted fitting), instead of the industry best practice of two, to ensure a perfect fit. “There are probably only 20 people in his workshop,” Jack says referring to his master tailor. “He has one cutter who cuts every single fabric and there’s also a lady who just does buttonholes and he’s involved in every step. I’m just lucky his stuff is good.”

It comes as surprise then that discovering their master tailor was something that happened by chance. “We started it for fun,” Jack says recalling Trunk Tailor’s early days. “We weren’t happy with the products we found and so after about 1.5 years of searching a mate of ours called us up and said: ‘I found someone who could make Milanese buttonholes’.” Today the boy’s relationship with their master tailor continues to strengthen though Jack tells me they find they still have to sweet-talk him from time to time. “Even now when we ask him to make jackets without any canvassing he’s still like ‘What’?” Jack laughs.

Over the years though menswear has become increasingly experimental. Spurred by the rise of social media, increasing class consciousness, and the democratisation of fashion knowledge, men continue to move away from the conservatism of the past and are diversifying the contents of their wardrobes.

But the boys have kept pace with the new world and compel their clients to broaden their sartorial horizons.“We really don’t want to ruin anyone’s creativity,” Jack says discussing a denim double breasted jacket with red, white and green buttons. “You don’t want someone wanting something and [you having to respond] ‘that will be an extra 200 hundred bucks please’. If you come in here and want something, we’ll try to do it.”

Yet despite their obvious love of the bold statement and their progressive approach Jack and Homie remain strict about the classic suit. A resounding “no” was their answer to my inquiries about making tailored sweatpants (“Even if he could do it,” Jack says in reference to his master tailor, “I wouldn’t ask him to.”) and while the boys still gush about directional fabrics from Cacciopolli and Harrison’s of Edinburgh, their own wardrobes are surprisingly sober.

Understandably, some may see this as a rejection of post-modern fashion’s “anything-goes” mentality, but their attitude reveals how deeply the practices of past are embedded in their visions for the future. Indeed, by introducing Melbournites to classic hand-made garments that embrace the dynamism of contemporary menswear, the boys are paying their respects to tailoring’s traditions while at the same time, avoiding its parochialisms.  And despite the fact that Jack and Homie don’t even look remotely Italian, Melbournites can rest assured with the knowledge that in the hands of these two guys, at least their clothes will. 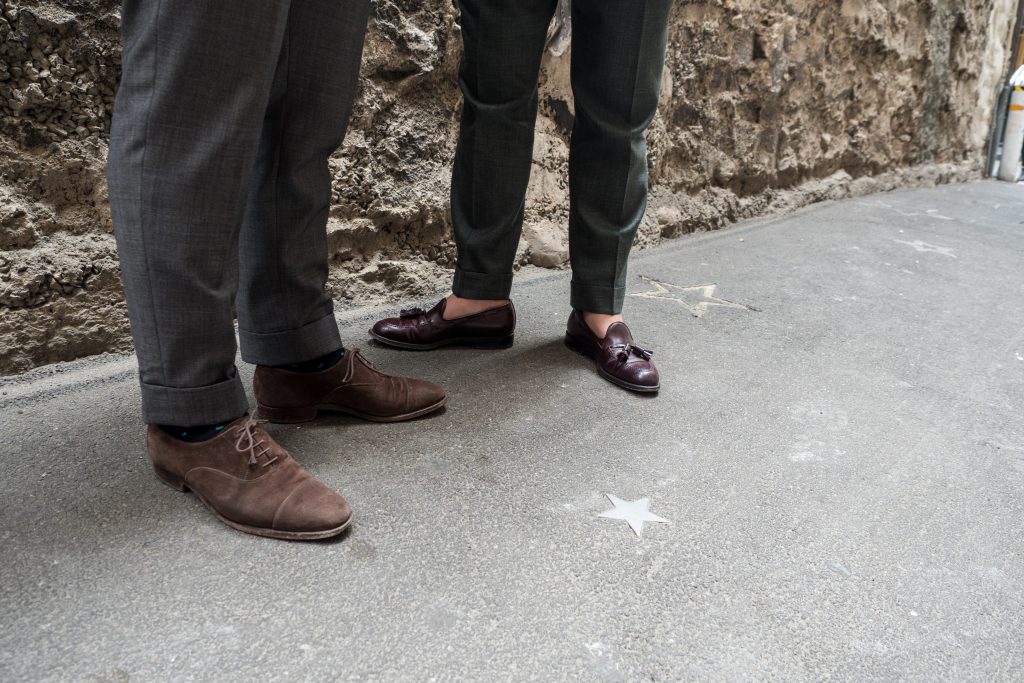 Jack and Homie will be holding a Sydney trunk show on 20th-21st August at the Sofitel Sydney. To book an appointment email the boys at: enquiries@trunktailors.com