The onset of winter has, to my mind, always brought a sense of something coming to a close. Whether it has to do with the plodding tread of the year or the bleak facelessness that strangers seem to adopt when hurrying past with collars drawn up against wind and rain, I find myself subject to an underlying anxiety for the return to the vitality and warmth of summer. Inevitably, the approach of winter has become the death of summer. Yet with the turn of the year, Brooks Brothers appears to have embarked on a task of delving into the coldest months of the year with new vigour; deigned to find new direction.

Founded in 1818, Brooks Brothers has so far been an oasis of civility in the shifting sands of fashion; the conservatism that has characterised their legendary appeal, quietly announcing its place to the world as a clothier for the American aristocracy. “While fashions come and go, Brooks Brothers has demonstrated that the desire for quality and good taste remains constant” as their official history declares proudly. And it is in quality and good taste that Brooks Brothers revels upon approaching its bicentennial anniversary with its AW 16 collection. 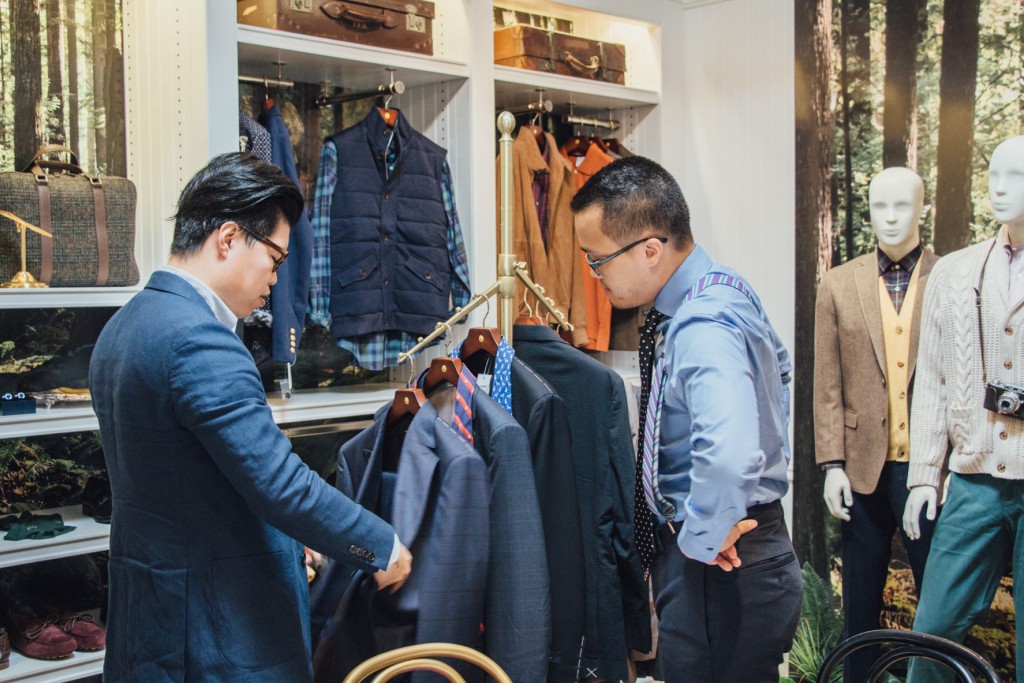 Mike (right) maintains a stoic facade while pondering the punch to his pocket the jacket will pack.

Stepping into the Sydney based headquarters at Waterloo, the parade through a maze of doors before a grey corridor to the showroom easily mimics the approach towards a throne room. And yet upon entering, the showroom appears more like a walk-in wardrobe – albeit one from an upper Manhattan penthouse. There is a homeliness about the room that makes it simple to stride over the rusty marsala rug to brush through the gentle clutter of cinnamon suedes and dusky navy knits.

The pieces from the new collection are nonchalantly elegant, drawing inspiration from their Ivy League heritage with soft shoulders and conservative silhouettes that would not appear out of place on Jackie Kennedy Onassis in her stylistic heyday. The collection basks in a familiarity that recalls a nostalgia for the sweetly simple life of the gentry, far from the unforgiving pace of our modern cosmopolitan world. 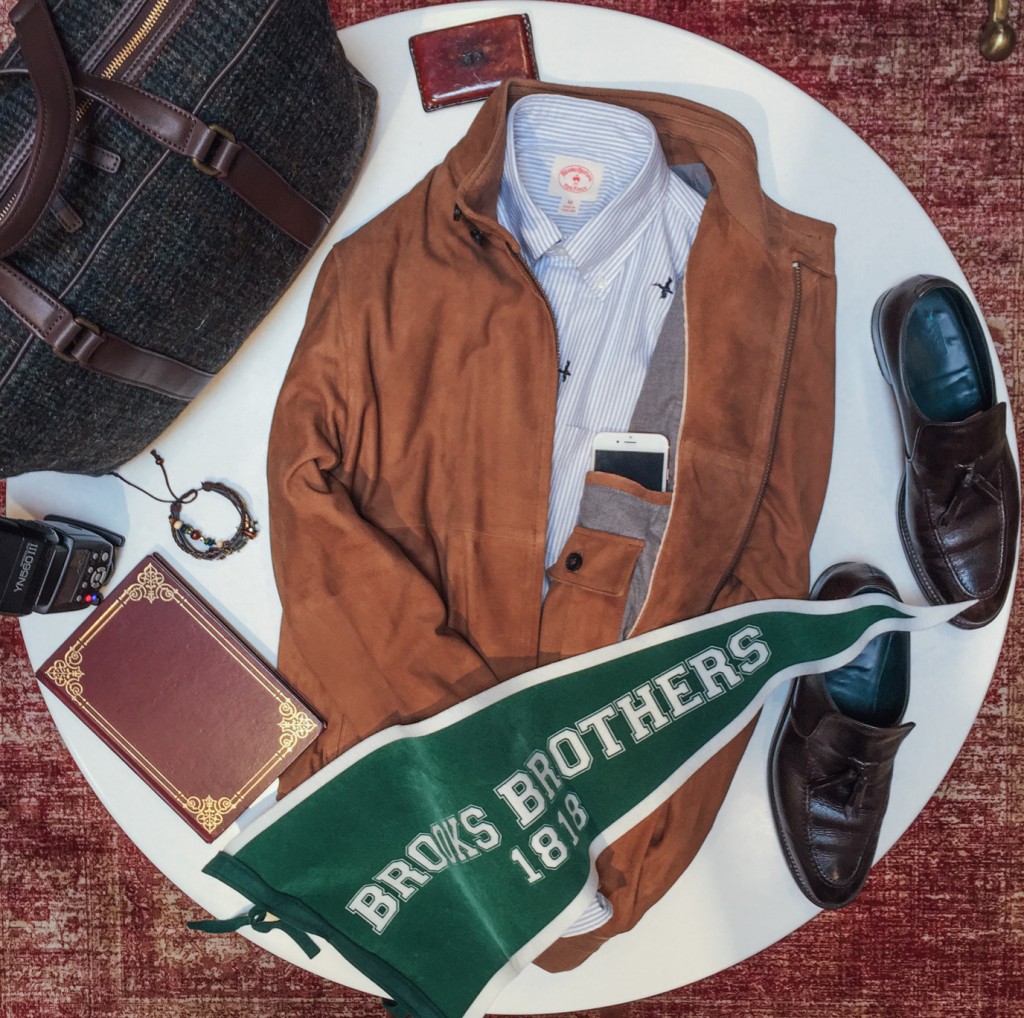 Brooks Brothers flagging down a smooth ride to enduring style.

And indeed, with the broad skylight stretching across the roof of their Sydney showroom, the woodland prints on the wall seem to recreate the quiet refuge of a forest lodge lost in time. As the oldest men’s luxury clothier in America, Brooks Brothers has thrived on its quiet eschewal of the rapid fashion cycles, drawing on the legacy of sartorial wear to bring to their collections a sense of a timeless endurance. As one journalist put it, Brooks Brothers had more “manner…than a style.”

But of course to reach such acclaimed heights, Brooks Brothers has been moving constantly, if not consistently, charging forward as a leading pioneer of sartorial clothing. For an iconically conservative men’s clothier, Brooks Brothers has ironically maintained international acclaim for their major innovative contributions, including but not limited to being the first to offer ready-made clothing; popularising the pink dress shirt; and introducing the Ivy League ‘Sack Suit’ which has become synonymous with American style. 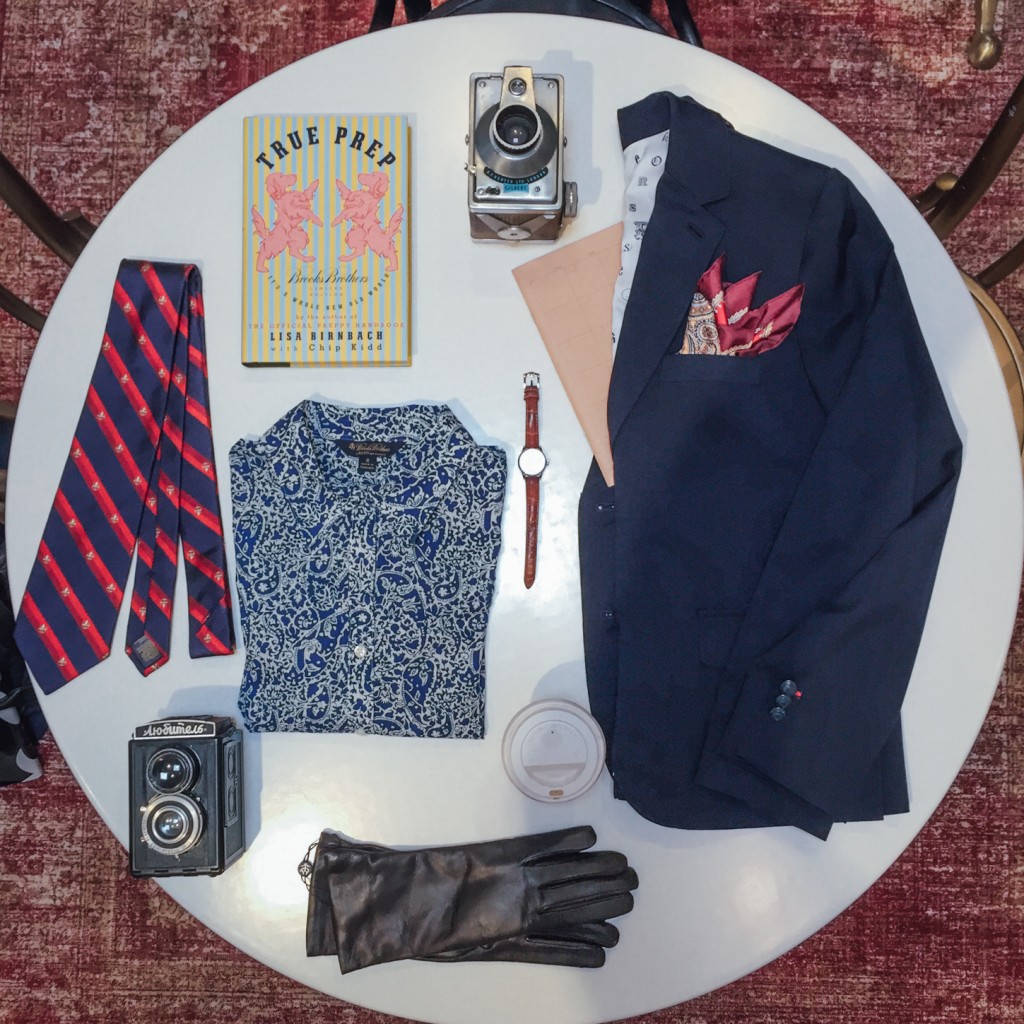 Watching out for a flash of summer amongst the blue.

And it is with their most recent indulgence that Brooks has again reworked the iconography of their golden fleece symbol to the demands of the modern luxury lifestyle. Notable at first glance across the new collection, is a distinctly less traditional direction, in particular, for the ladies who endorse the golden fleece. The new showroom displays far fewer suits and jackets for female patrons, which included various names of equally golden ladies such as Katherine Hepburn, Elizabeth Taylor, and Nina Foch. Instead, the reoccurrence of leather brings a modern reinvigoration of the label and a link to the historicity of the brand. 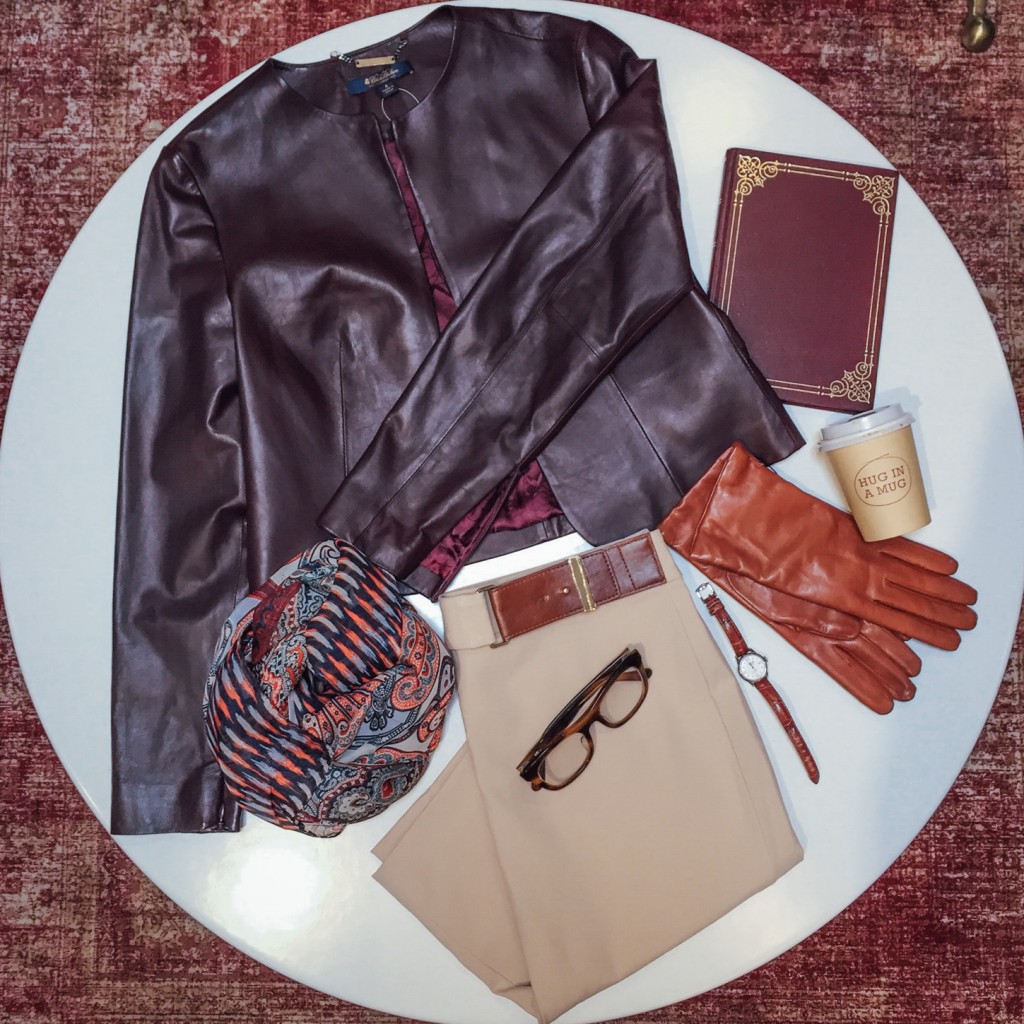 There’s a delightful comfort in embracing a new hide to yourself.

The lambskin leather with its velvety feel is clearly a guest star amongst the various wool products.  Softer and more delicate to the touch than most standard leathers, such as cowhide or even the finer calfskin, the delectable chocolate lambskin gloves and ox-blood jacket bear the trademark delicacy with which Brooks Brothers has handled its product innovation. 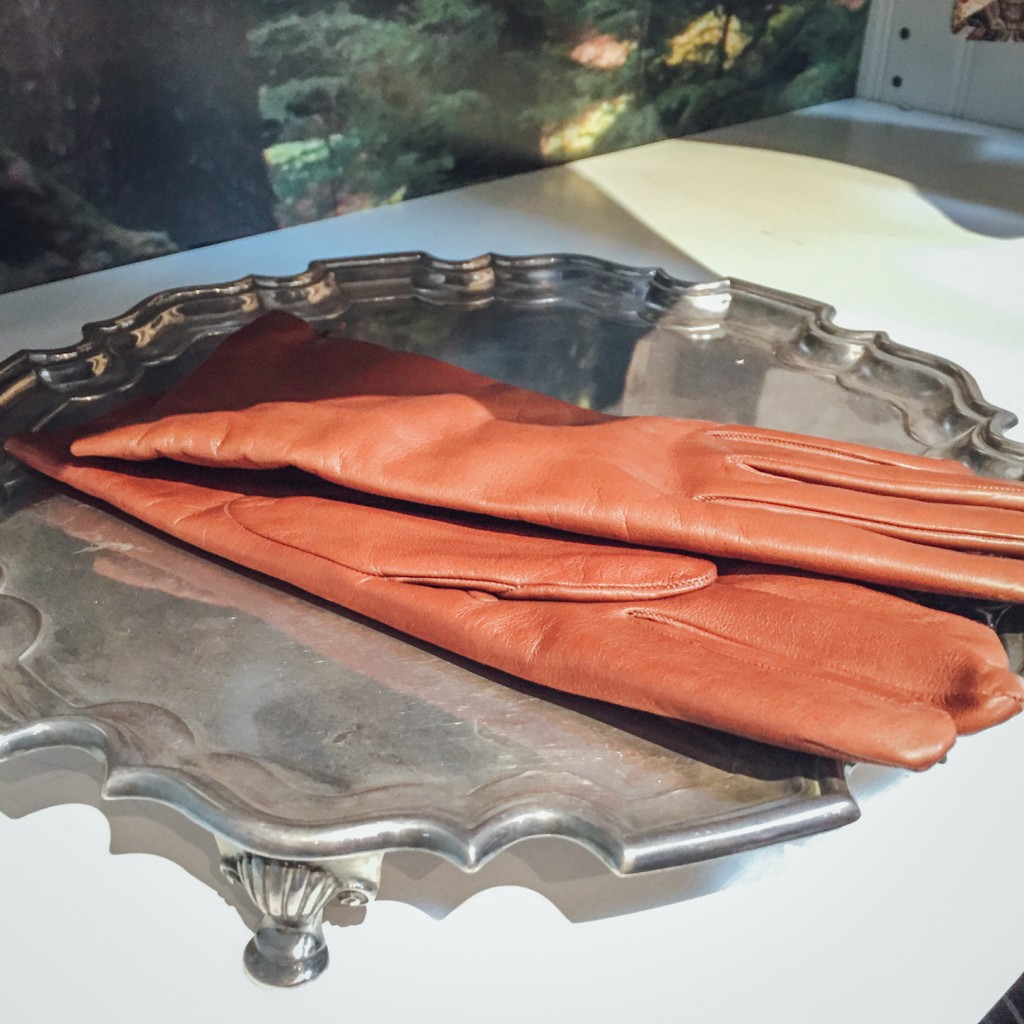 You’ll be as likely to throw down these gloves as actually challenging someone to a duel.

Despite the prominence of leather and the more relaxed, casual Ivy League prep range, the obvious distinction of the collection is their loyalty to the brand’s core axiom. As declared on a printed announcement of the opening of shop on 7th April 1818, Henry S. Brooks would “make and deal only in merchandise of the finest body”, a dictum clearly embodied by their most recent sartorial development.

Yet remaining there in the room, it occurs to me to wonder what the founding brothers would think of the modern throwback collection to a varsity golden age. George Plimpton was famously commissioned for a celebratory advertorial in 1993 to celebrate Brooks Brothers’ 175th anniversary in The Atlantic Monthly, in which he posed that very question to William Roberti, President and CEO of Brooks from 1987 to 1994.“They were traditionalists but also practical,” he had replied. I can only imagine that the founding brothers would probably have taken the brand in its modern state in a similar direction. 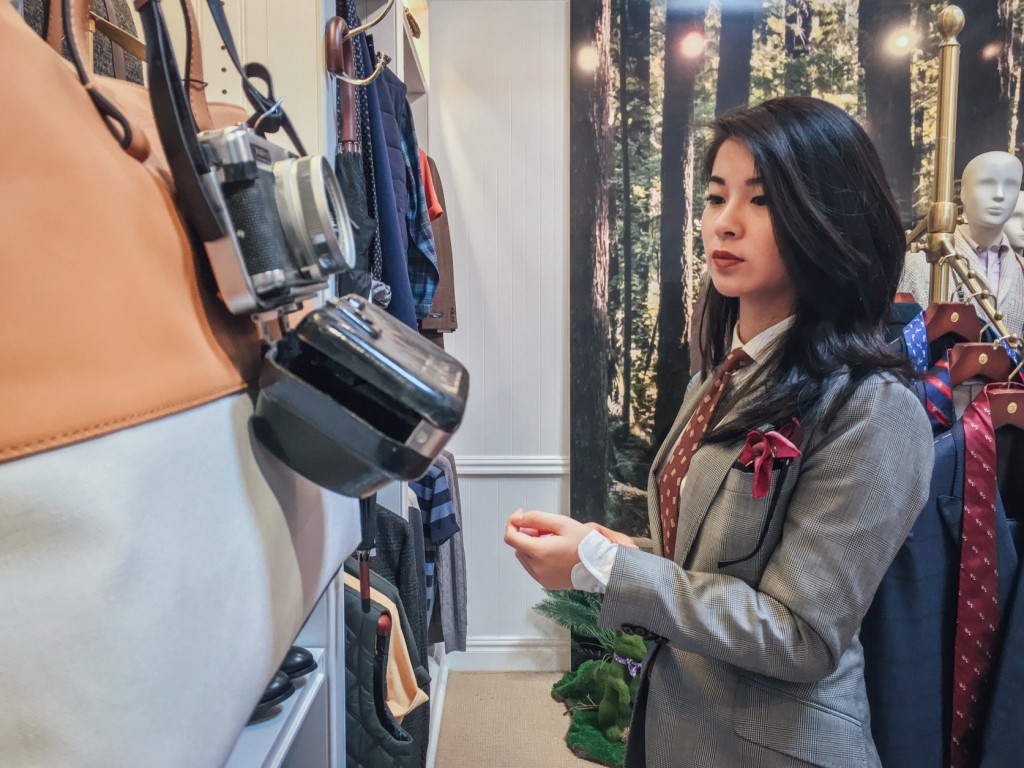 Someday I’ll achieve the same facile timelessness without a need for the Fountain of Youth.

And as such, from their first offering of ready-to-wear suits to the collection of today, the heritage and continuing legacy of Brooks Brothers appears to lie not in its designs, but rather offering garments of the highest quality. “What is important,” Roberti had further declared in that advertorial, “is never to stand still. No business can. The secret is to add products and not mess with what works.” And so it seems that rather than dreading the chill of the season, Brooks Brothers is preparing to relish a stride through the frost-floored forest of autumn and winter 2016. Perhaps I should take note.

After all, Winter is coming.