Real gangster style doesn’t have to mean tuxedos and fedoras.

Named after a euphemism for heroin addiction and constantly chasing the next high, Chasing the Dragon follows the rise of 70s Hong Kong’s most notorious drug lord. It’s a movie of excess, befitting the extremes of the era: extreme violence, extreme poverty, extreme corruption, extreme wealth, and of course, extreme style.

Andy Lau makes his appearance on screen in a covetable collection of luxurious three-piece suits, complete with just about every menswear accessory possible, from pocket squares, to tie bars, to gold-chained collar pins. Only Lau, Asia’s 90’s heartthrob, could make these near fashion faux pas look more than acceptable.

But it’s our favourite leading (Ip) Man, Donnie Yen, as the notorious “Crippled Ho”, who earns the film a place on this list. If a fashion makeover is what you’re looking for, then wait till you see Yen’s transformation from street rat to drug lord. Ditching dingy old shirts for 70s extravagance, complete with a slick blowout and a heavy-duty walking stick with a gold grip (that doubles as a solid melee weapon), Ho is a total baller if I’ve ever seen one.

So you think American gangsters are badass? You ain’t seen nothin’ yet. – Sharon

Guys, this movie is the best on this list, I don’t care what anybody else says. There’s family, there’s betrayal, and there’s  even young beautiful women kissing ugly old guys (c’mon, as if that doesn’t bring your hopes up).

But the best thing is that these gangster guys know how to dress themselves. Ain’t none of those overdone spearpoint collar shirts with piss pot 11cm wide four-in-hand ties bullshit that’s in every single movie from the 70’s. Nah bro, you see Sergio Leone dressed the guys in black tie with wing tip collars all the way to black wife beaters poolside. This movie has real people with real style. A young Robert De Niro bashing a guy wearing a white shirt with a collar pin holding up his god damn tie?  Like c’mon the guy is bleeding out and he still got his jacket on like a real g.

It goes to show you can be a gangster, as long as you wear it like a gangster. – David

A man turns and looks at his son in the passenger seat of the car. The journey to Chicago will be long and tough and there are dangerous men following them.  Will his son be strong enough for the journey ahead? Will he avenge the murder of his mother and brother? Will his soul stay pure?

The man is Irish mob enforcer Michael Sullivan. And the film is Sam Mendes’s Road to Perdition.

Played by Tom Hanks, Sullivan is an enigma to everyone – including his son, his wife, and maybe even himself.  He is a man of few words with much of his personality revealed through his knee-length double breasted polo coat. Made of dark grey charcoal wool, the coat is the very definition of brutal stoicism. Its luxurious anonymity reflects Sullivan’s successful criminal career, while at the same time, his desire to distance himself and his family, from the life he has chosen.

Unlike the other films on this list, Road to Perdition’s style is quiet and methodical. Conservative point collar shirts and thin ties, allow the Irish mob to blend in, while the film’s sombre colours hint at personalities pushed deep beneath the surface.

The sartorial asceticism befits characters who don’t celebrate their lives as gangsters but wrestle with the shame of it. Forced into a life of crime, these damaged men strive to save the souls of their loved ones, even if they inevitably fail to save their own. – Will 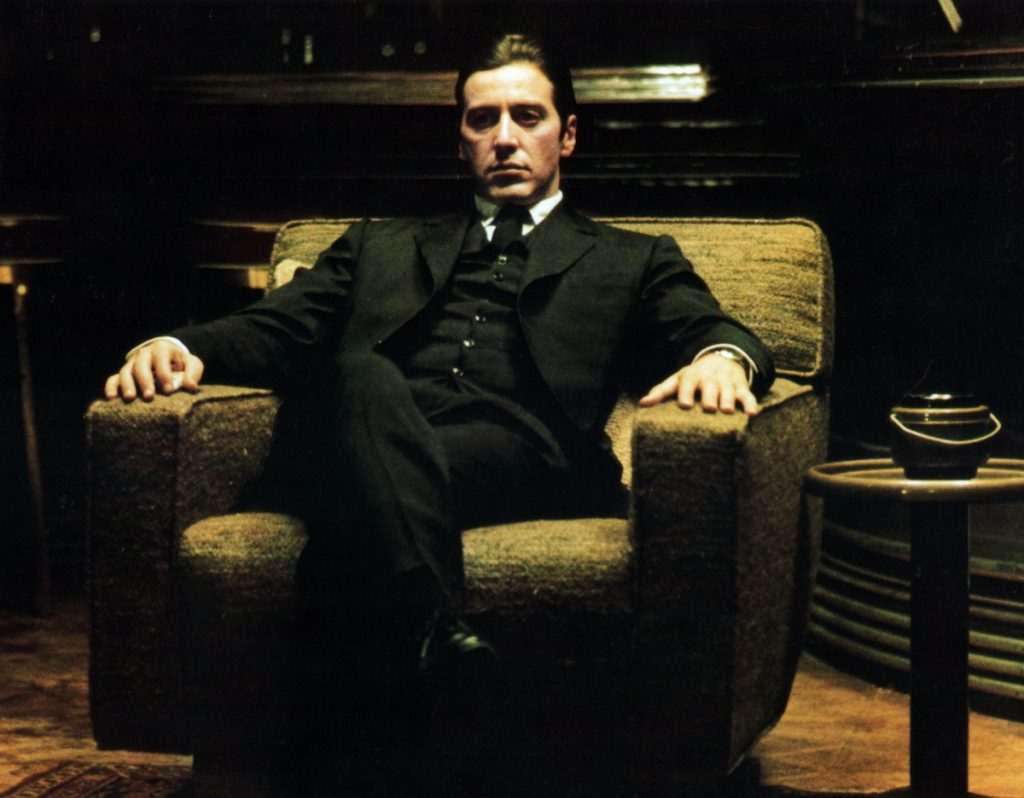 Decades after Francis Ford Coppolla’s cautionary tale of power and corruption first premiered, and almost a century after the hey-day of organised crime, the style of the Godfather has remained the benchmark by which all other films are judged.  No other film captures the psychology of its characters quite like it.

Michael Corleone’s style for instance, is an important factor in representing his rise to power. At first, Michael’s sack jackets signify his rejection of the gangster lifestyle. However, as the film develops, his style becomes darker and more sophisticated. Trading in his Ivy-league, corduroy suits for pinstripe three-pieces, Coppolla alludes to Michael’s (de)volution from decorated war-hero into New York’s most powerful crime lord.

By contrast, the former Don, Vito Corleone, starts off dark and patrician but later becomes earthy, tweedy and rustic. As he eases into retirement, Vito incorporates homely cardigans as part of his uniform. Straightforward and simple, Vito’s outfits reflect the Italian ideal of sprezzatura, with his ties knotted backwards and belts worn below the loops.

And yet, it is Fredo, not Michael or Vito, who is the trilogy’s most tragic character.  The most incompetent of Vito’s sons, Fredo’s style, like the Pitti Peacock’s, is defined by flash and excess. From the cream coloured suit he wears in Las Vegas, to the tartan tuxedo at Lake Tahoe, Fredo’s style reflects his feelings of inferiority and resentment. Indeed, it is only when Michael confronts Fredo about being a traitor that his true personality emerges. Collapsed in a chair beside the lake, Fredo wears a thick polo shirt and oversized cardigan that makes him look like a helpless child. Unlike his father and brother, Fredo never actually dresses like a gangster. Instead, he dresses like what he thinks one ought to look like.

Unsurprisingly, the style in The Godfather has profoundly influenced the films that followed it. From the gauche tailoring in Goodfellas, to the quiet double-breasted suits in Eastern Promises (and even the aloha shirts in Takeshi Kitano’s arthouse Yakuza films), gangster style has come to reflect the moral transgressions of these criminals and their nebulous status as outsiders.

Why the style endures then is an interesting question. Perhaps we all secretly aspire to a life of crime and excess. Or perhaps we desire the gangster’s fraternal bonds and their quasi-medieval codes of honour.

Whatever the case, even if we can’t derive any moral lessons from these criminals, at least we might find some sartorial ones. Tuxedos and fedoras excluded. – Jeff