Australian menswear is at a turning point. The rise of local talent, increased access to information, economic stability and a booming luxury industry has helped raise the level of fashion discourse in the country.

Though the rapid changes have led to increased sartorial sophistication it has also resulted in homogeneity. Too many Instagrammers look like corporate myrmidons or Surry Hills hipsters.

With the cultural flattening effects of globalisation there’s a risk that Aussie men’s style might plateau. But I’m optimistic. After all, we’ve come so far.

Our friends at The Versatile Gent compiled a great list last year of the the most stylish Australian Men on Instagram (of which we were honoured to be a part of). But I thought I’d shed some light on some of the more quiet achievers. 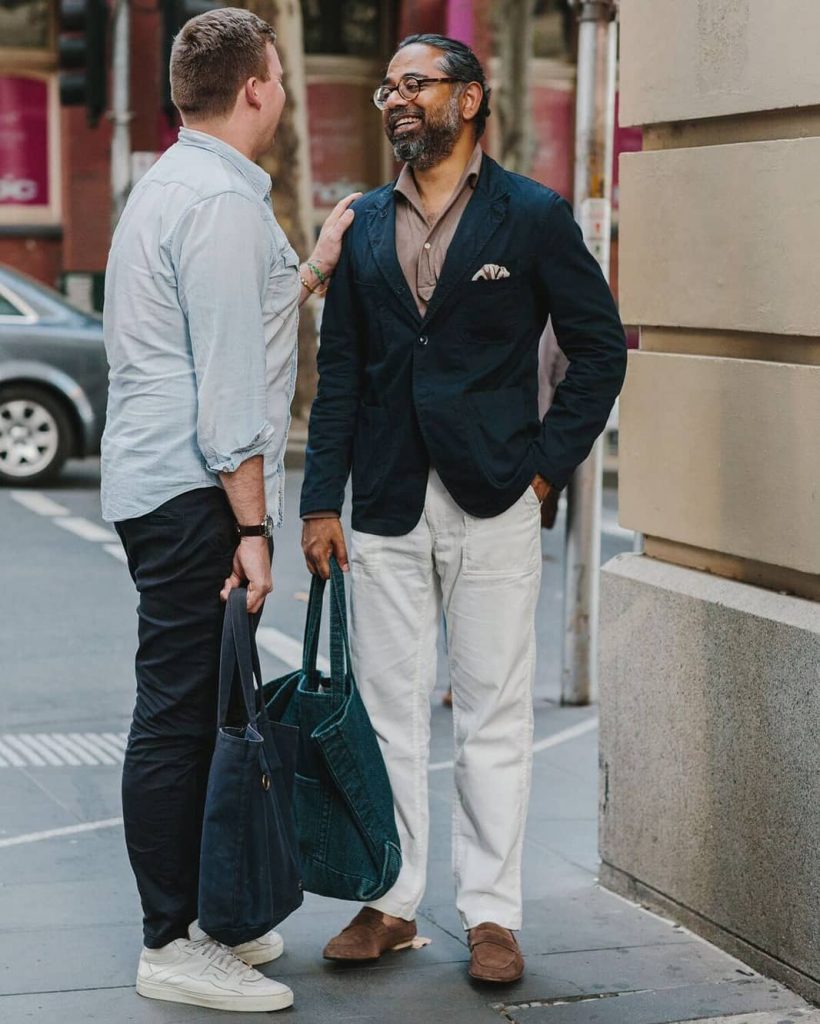 Gerry combines disparate garments effortlessly. He prefers modern tailoring from the likes of Drake’s, P. Johnson tailors and Calder Sartoria which he often matches with workwear ranging from the conventional (Vetra) to the off kilter (Engineered Garments and Kapital). The result is a style that is eclectic, complex in the way it balances patterns and tones, yet always effortless.

What’s shines out most about Gerry however is a certain “je ne sais quoi” he brings. Part of that is a smile that says:  “Don’t Worry. Be Happy”. 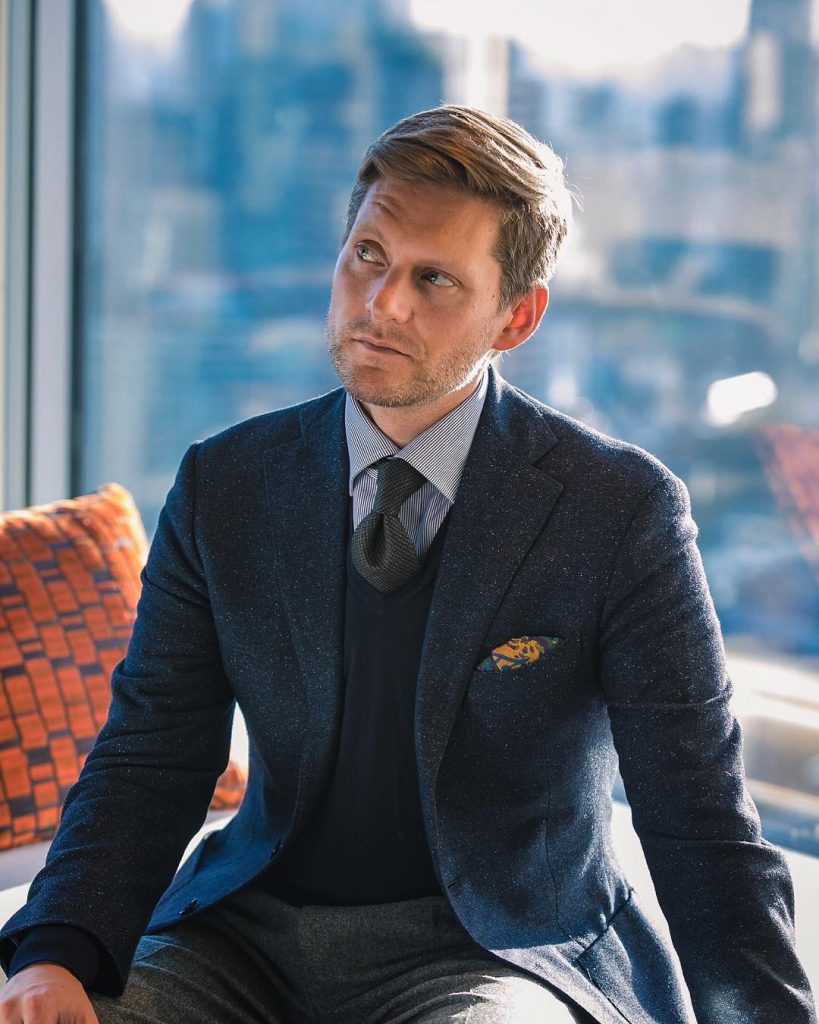 Sebastian practices an Australian interpretation of what Mark Cho of The Armoury describes as “International Classic”.

His outfits belie a quiet confidence that’s rare in the dog-eat-dog world of the corporate jungle. It’s the details that count for Sebastian, whether it be the understated expression of a spalla camicia shoulder, the angle of a jacket lapel, or accessories that surprise and delight with unexpected colours and textures. This is reflected in his preference for brands that re-interpret Italian style including Eidos and B&Tailor. 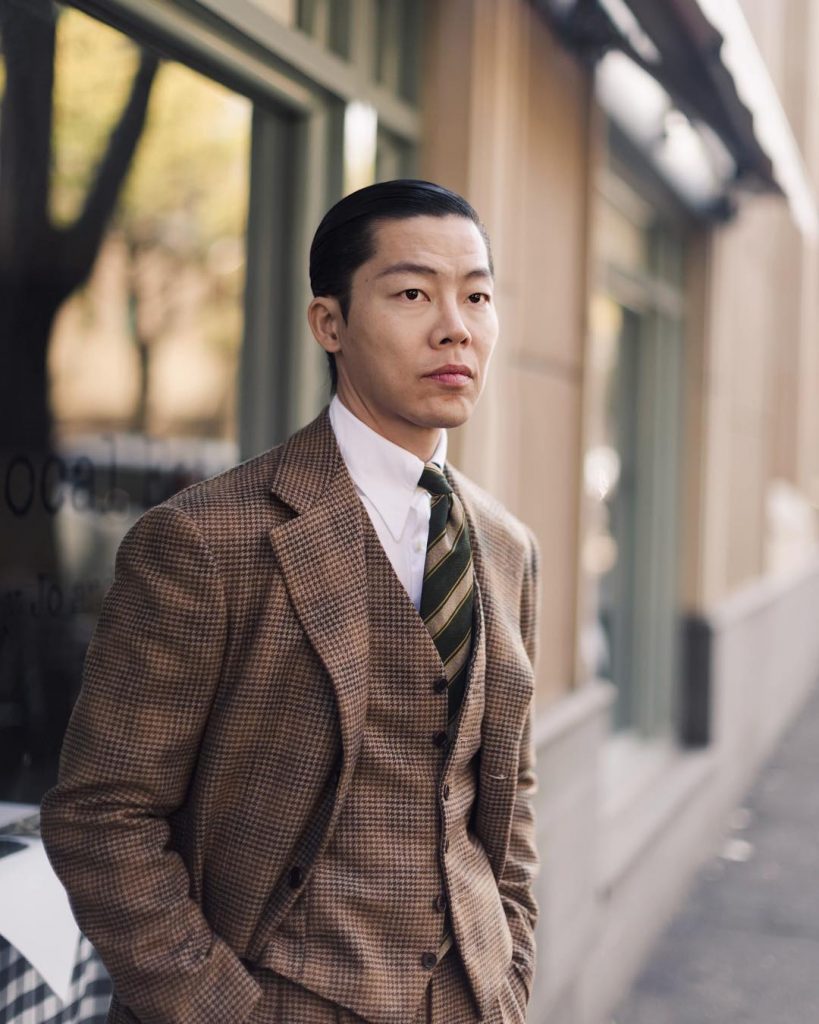 I’ve written about Joe previously and in my eyes the “Anti-Peacock’s” style is still world class.

Control is the defining trait of Joe’s style  – the result of years of experimentation and sartorial soul searching.

As the owner of The Finery Company, Joe’s tastes are inclined towards Asian bespoke artisans including the Korean tailors B&Tailor, Frui tie makers and Maison Steady State shirtmakers. Joe’s style has English and Italian influences but he has internalised them so deeply you’ll rarely notice them. “You have to keep it up,” Joe advised me once. “And maybe when you get to sixty or seventy, you’ll own your style.” 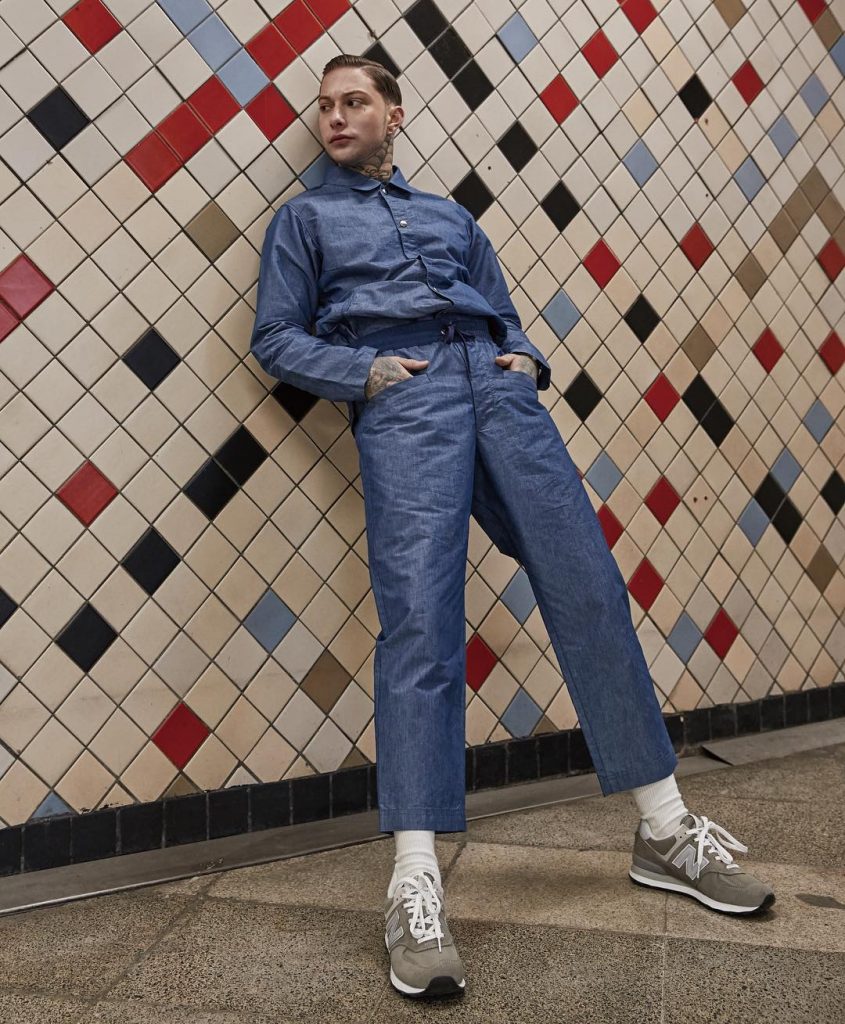 Daniel is an Australian who lives and performs in South Korea as a model, television personality and tattooist.

His style reflects a pragmatism that avoids fetishising functionality. Though he looks great in a jacket and trousers, it’s his casual fits which really shine.

What separates Daniel is his taste for choosing that works for him as opposed to what’s simply “on-trend”. Chinos are high-waisted creating an elegant legline, colour combinations are classically flattering but never dated, and his taste in fabrics are always offbeat. More importantly he carries himself with an easy stoicism that really shines through.

Where too many self-described “creatives” mistake eccentricity and excess for individuality, Daniel shows that sometimes true creativity lies in just being yourself. 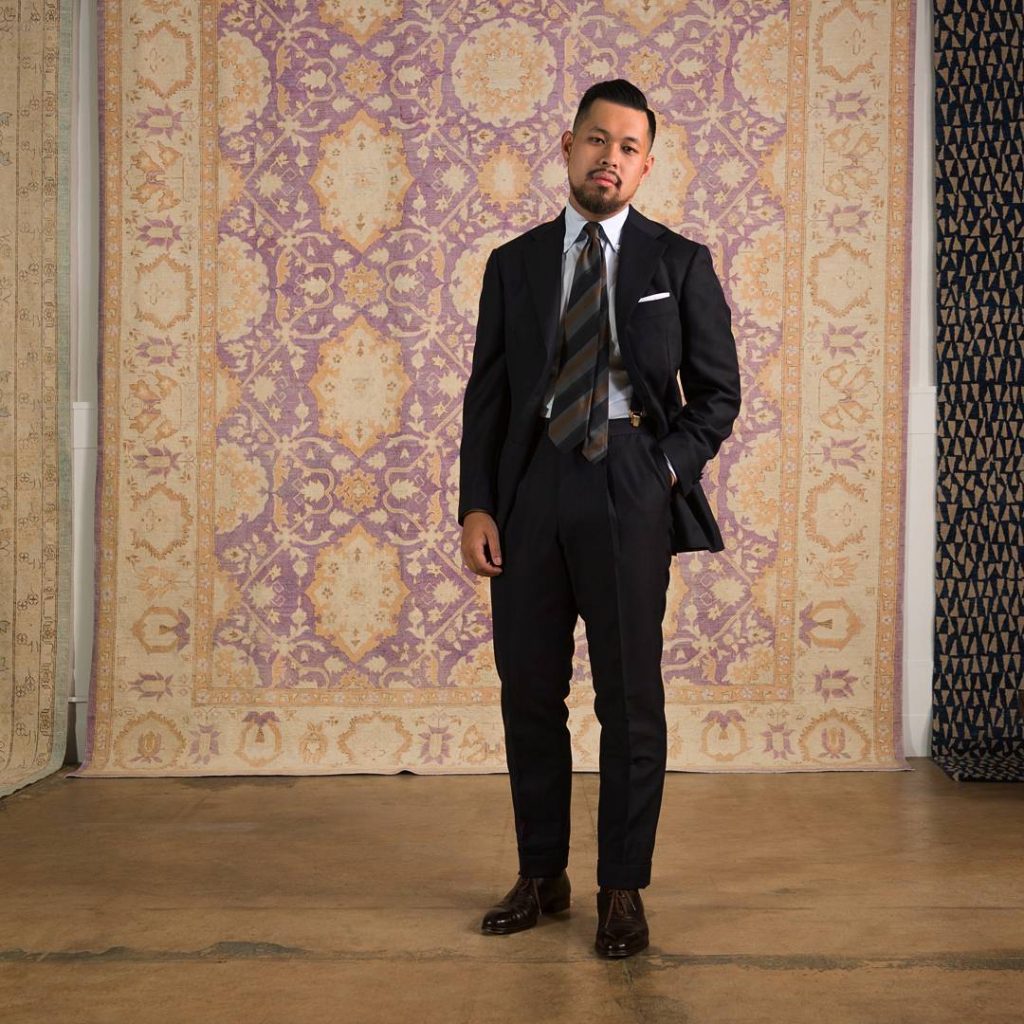 Sam is an Aussie expat currently employed at The Armoury in Hong Kong. One of the younger blokes on this list, Sam’s style reflects a maturity (though not necessarily sobriety) beyond his age.

Sam’s style is influenced by the “Sartoria Sportiva” approach of The Armoury, and its selection of world-class artisanal brands including Ring Jacket, Coherence and Orazio Luciano but styled with assertiveness.

Sam avoids garments and accessories that call attention to themselves. A preference for solid worsted, subtle herringbones and pinstriped fabrics add severity that is offset by the subtle tones of a madder tie or folds of a linen square. Understated colour and carefully considered textures define Sam’s style. 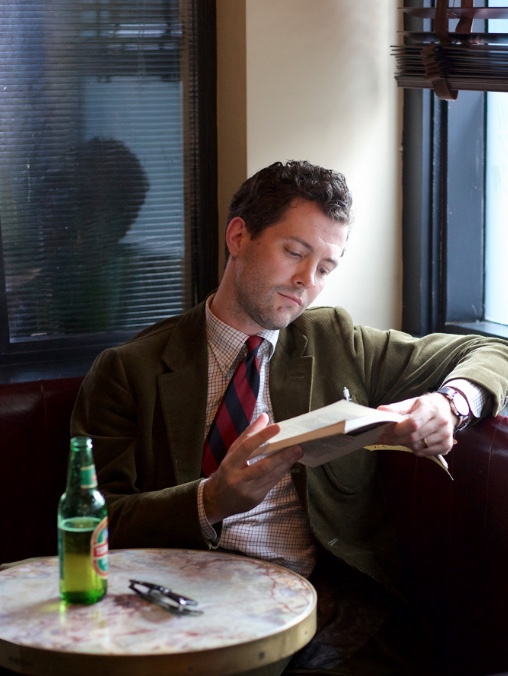 Dick Carroll is a cartoonist and menswear consultant who leans towards classic Ivy style.

He prefers dartless “sack suits” that drape carelessly over the body, full chinos, tweeds and corduroy, button down collared shirts, canvas sneakers and round loafers found in Ivy bibles like Take Ivy. (Ties are of course, nearly always club or repp).

But his style is more than the sum of its parts. There’s a certain optimism and whimsy that comes across – qualities that have seemingly disappeared from Trump-era America. Just read his comics to see what I mean. 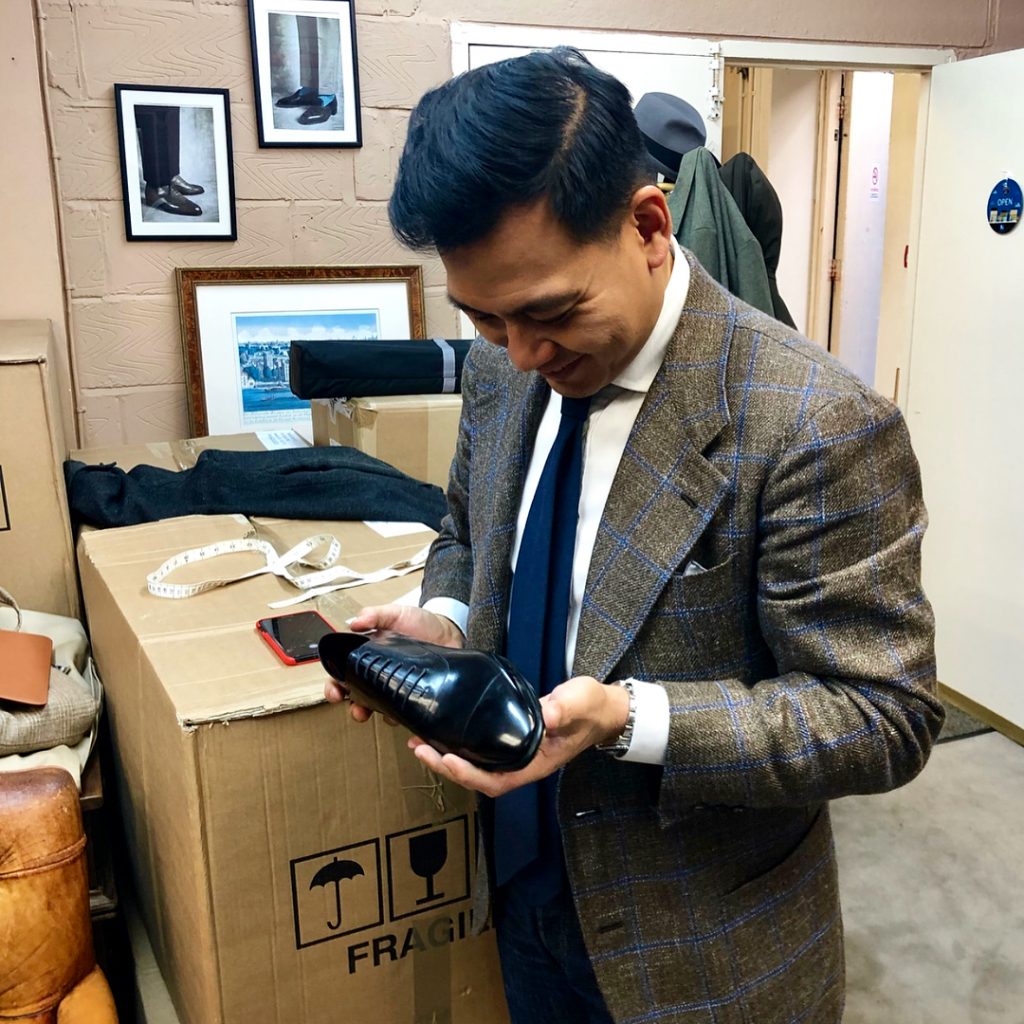 Gary is the author of the world’s best bespoke shoe book: “Master Shoemaker: The Art and Soul of Bespoke Shoes“(We see what you did there mate).

Gary’s style reflects the breadth of his international experience with Southern and Central Italian influences being the most prominent. Whether he’s rocking a suit from Florentine tailors Liverano Liverano and Sartoria Corcos, softly tailored jacket from Rubinacci in Naples, or a beautifully draped sportscoat from Steed in England, Gary is always dressed comfortably and respectably.

As a self-described “Travelling Salesman” I imagine he’d have to be. He’s definitely no Willy Loman. 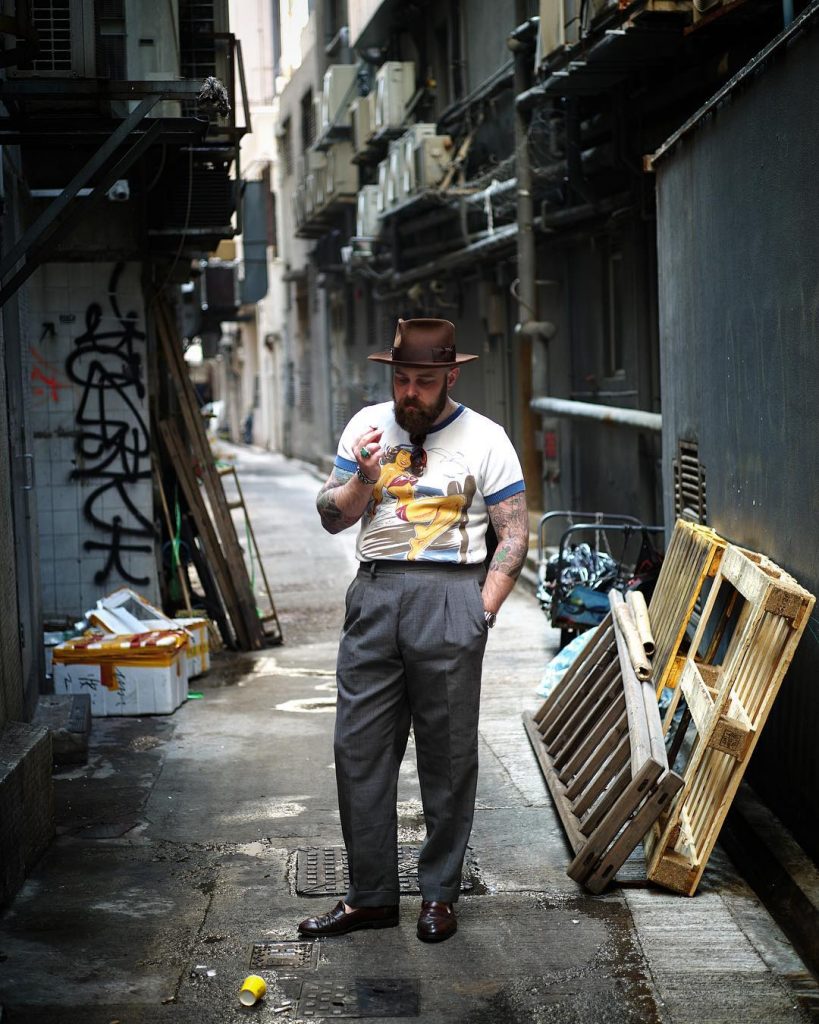 Ethan is an Aussie expat, who heads up Brycelands & Co., a men’s workwear and tailoring haberdashery with locations in Tokyo and Hong Kong.

Ethan’s rugged workwear-sartorial style recalls 20th century icons like Steve McQueen, Paul Newman and John Wayne. (Y’know the strong silent type.). Ties from Seven Fold Firenze and Tie Your Tie, and chambray shirts from Ascot Chang, are matched with suits from Dalcuore to create looks that acknowledge the past without looking costume-y. His taste in accessories is also incredibly distinctive with frames from Solakzade, hats from Wellema Hat Co, and vintage Native American silver jewellery. 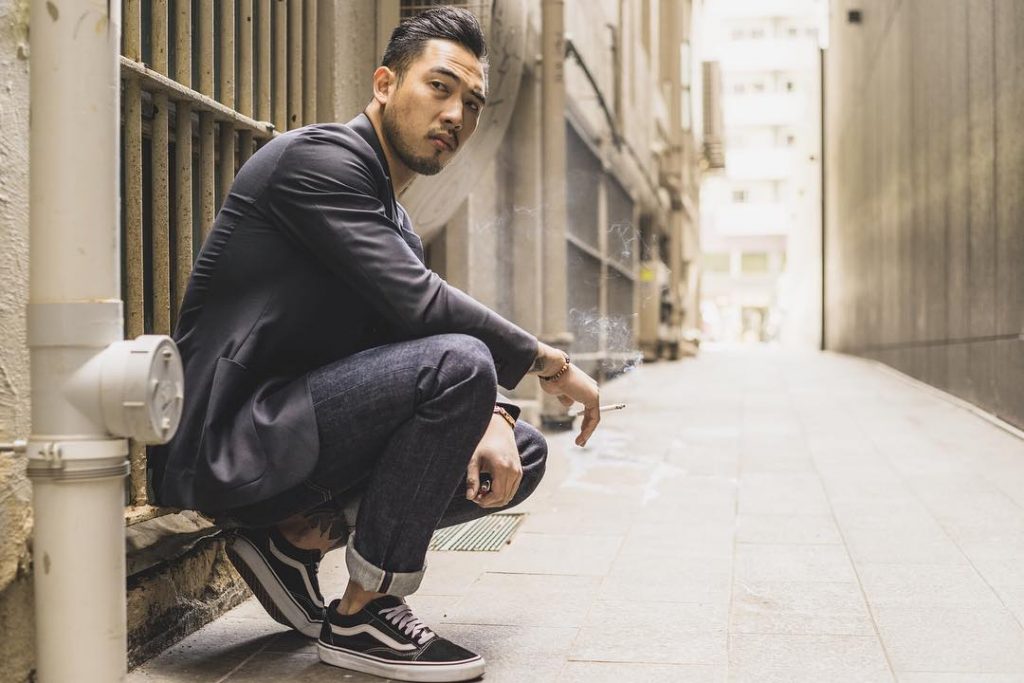 Geoff, the director at SNA, prefers a modern tailored look with slimmer coats and low rise trousers that look recall the proportions of jeans and casual jackets. 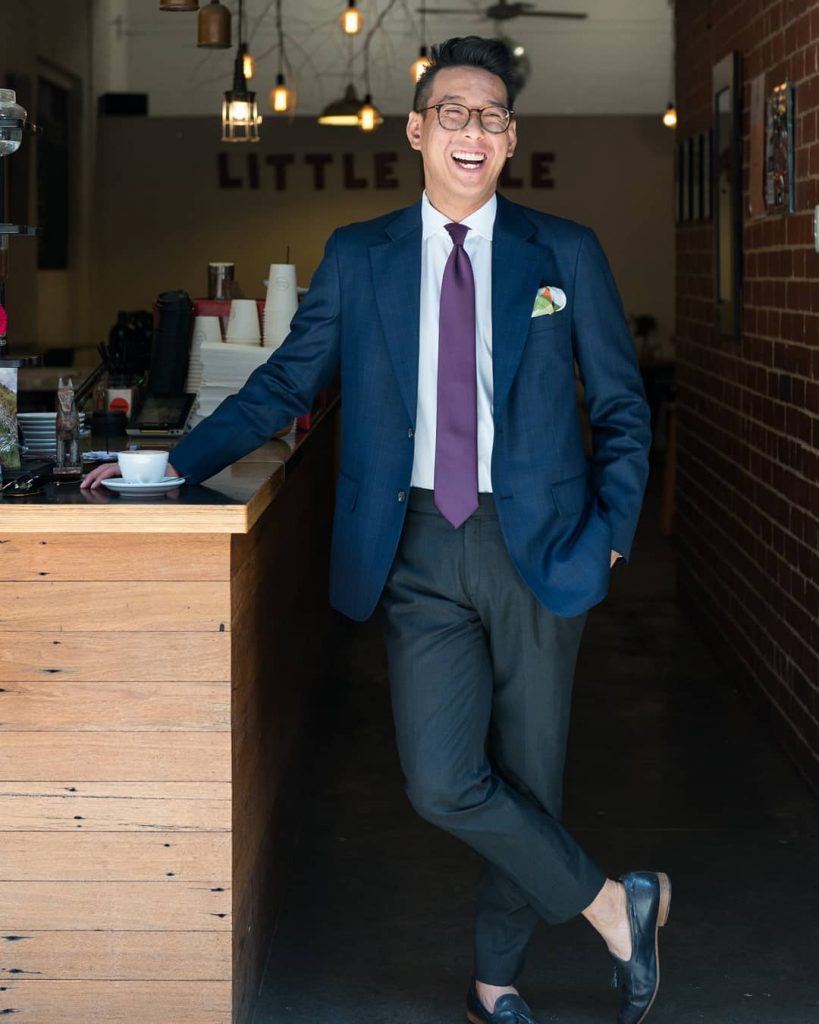 Paul’s tastes on the other hand, vary from suits with slim notch lapels to giant peak eff-off ones. He also enjoys integrating a casual dimension to his fits with loafers or the occasional tee in place of a button-down. 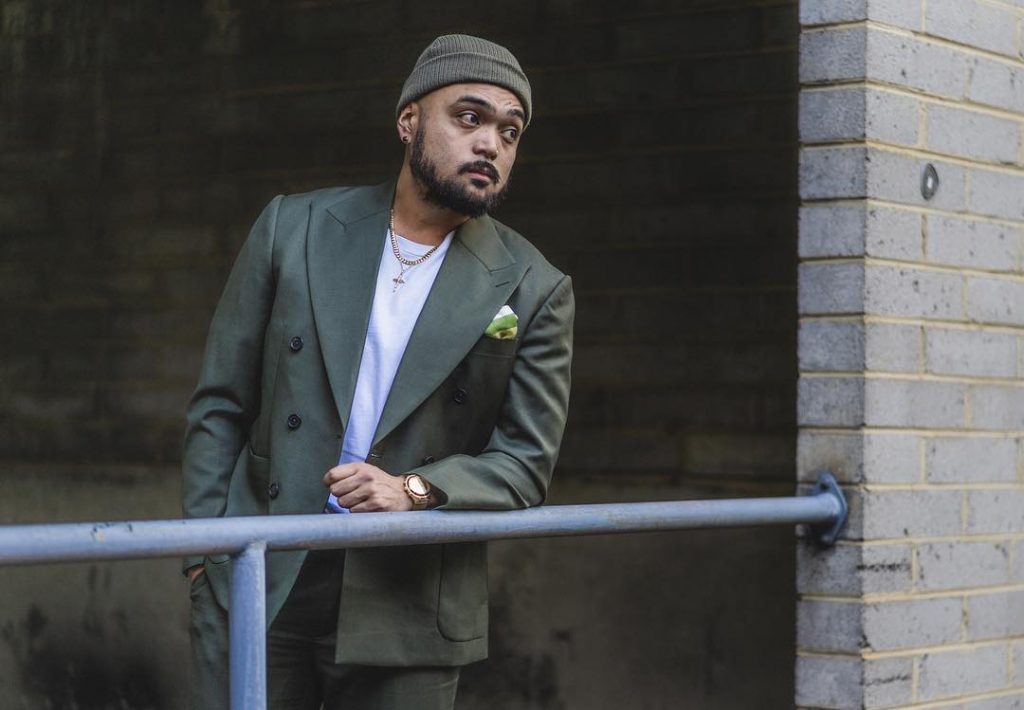 Jake falls somewhere in between with his streetwear and sartorial elements remaining more distinct. He might wear a pair of loafers with a t-shirt and jeans one day and a pair of sneakers with a suit and tie the next. 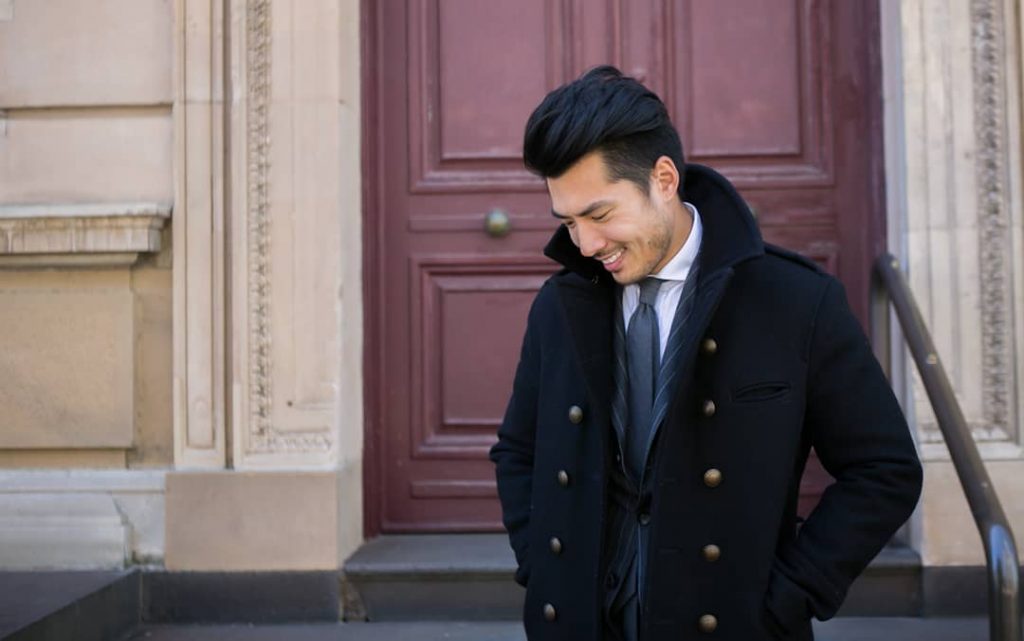 Adrian’s tastes are the most sartorial of the crew. His trousers feature higher rises with side adjusters and thick waistbands, while his suits lean towards conservative navies, houndstooth and pinstripe. His casual fits also come from a sartorial angle as seen with his taste for  Eidos military jackets and Burberry peacoasts