Plenty of men can dress in shades of blues, greys, and browns for their entire lifetimes and still be considered well-dressed, but as soon as I saw the forest green in this shantung silk necktie in the shop, I knew I was a man of colour (pun intended).

I remember a picture of Mark Cho, one of the original Armoury boys, wearing a similar tie and despite the dark and deep greens of his neckwear, it all worked in a coherent and flawless fashion that expertly framed his face. As soon as I sighted down that tie, I had to have it. America really opened up my eyes (and wallet) to the wide range of clothing I had yet to see and I walked out of the store chuffed, imagining Will fascinated by the beauty of raw shantung when I wore this tie next. He was.

Alan Flusser has said that, “One of the most important – but least understood – functions of male attire is to lead the viewers eye toward the face” and being able to even decently colour and tone is especially advantageous to looking your best.

Keeping in mind the words of Flusser, I utilised the matching of tonal composition between the outfit and the appearance of my face to pick out what I wore today. I have fairly high-contrast features (dark black hair, light skinned), so wearing the new tie which is relatively dark in tone, I paired it with a crisp white M.J. Bale shirt – collars always non-fused and double stitched at the seams – in order to achieve the extreme juxtaposition of shades I’m after. To explain briefly, it’s a sort of sandwiching effect between the dark hair and the dark tie, which brings focus to the vastly distinct middle layer: my absolutely stunning profile. Tom, on the other hand, would be better suited to low-contrast dress (he has a slightly ruddy complexion and golden blond hair). 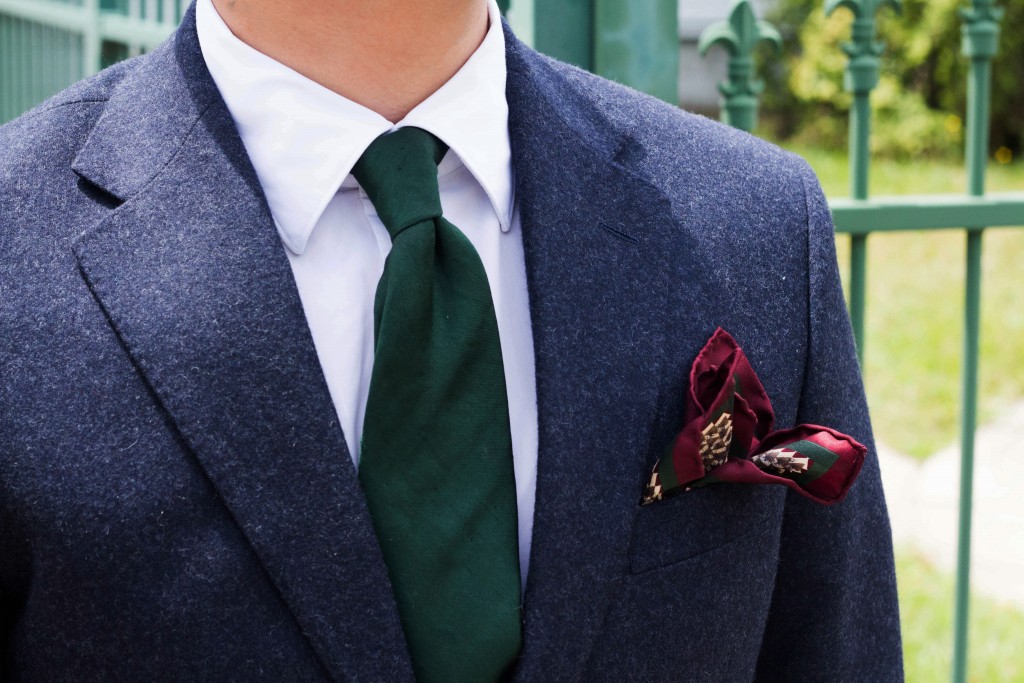 The natural shoulders of the jacket produces a casual silhouette and a patterned motif silk pocketchief in the welted breast pocket adds shades of a rich purple, complimenting the tie and adding another dimension to the ensemble. I donned the beige RL chinos, being my choice of casual cool trousers, especially with the dark navy flannel, and decided to sport the chocolate brown oxfords to keep it smart casual. Voila. This combination of shades would go on to divert the attention of attractive and potentially desirable audiences towards my most beautiful visage and deter them from approaching me, scared of embarrassing themselves. I’ve been told it’s perhaps that my face isn’t as enchanting as I think it is, but at least I would’ve got their attention as a well dressed man of colour.