Ethan Newton: the man behind the beard, his Aussie roots, and his love for military-workwear.

When I was around eleven, mum would drop me off at a large house in Yagoona every Saturday with six or seven other kids – private tutors made a killing. At lunch time, everyone would either go to the kebab shop near the station, or the Vietnamese fish n’ chip shop on the other side of Hume Highway which I later discovered sold hard drugs (a story for another time). But one time, as my friend and I were walking through the alleyway next to the train lines, we heard something we’d never forget: gunshots.

So when Ethan Newton, Aussie ex-pat, menswear icon, and rugged old salt, told me that he grew up there, I wasn’t all that surprised.

Ethan was raised in a family interested in clothing. His mother was a proficient seamstress, his dad was a bikie and a fan of real, hard wearing stuff, and his older brother was interested in the same vintage stuff that Ethan was into. During the early nineties, he and his brother could be spotted after school in their Birrong Boys uniform, wandering around Mitchell King, an old vintage shop not too far from Sydney’s Chinatown. Though the shop no longer exists, memories of rummaging through racks of other people’s clothes still linger in Ethan’s mind.

“We couldn’t afford to spend a lot of money on clothes, so you had to buy stuff that was super cool and interesting and different to everybody else, but also could keep it for a while,” he says. Unlike a lot of other kids on the block, the brothers hunted for U.S.M.C. field coats and worn in bomber jackets, the type of stuff that made you feel “James Dean” cool. “Vintage military and work wear is a rabbit hole into all the cool things in the world, like watches, hats… everything.”

And his love for clothing would take Ethan all around the world.

It all started when he turned twenty and left Australia for Japan. “I met Yamene-san, the owner of Evisu  just by chance,” Ethan recalls. “I met him in his store and we had dinner and we got really drunk together and he offered me a job.” He would continue to work odd-jobs in the fashion industry and eventually ended up designing patterns for P. Johnson Tailors in Sydney, co-founding The Armoury in Hong Kong, and working as the Senior Director of Men’s Luxury Brands for Ralph Lauren in New York (yes, the Ralph Lauren). Today, though, at 36 years young, Ethan runs a small store called Bryceland’s & Co., titled after his mother’s maiden name, located in Shibuya, Tokyo.

Stepping into the shop is like stepping into a fifties Californian bungalow. Regiments of military garments line shelves, film cameras and soon-to-be-empty whisky bottles sit on a hardwood countertop, and odd bits of silver jewellery and barber-style shaving razors are assembled in wooden cabinets as if part of a museum exhibit. At the front of the store, is Ethan’s apprentice, Itahashi-san, who pauses his hand sewing for a moment to serve us some coffee.

“Part of what I’m doing here,” he says, “is trying to blend what I love, which is vintage military and workwear, and putting that with classic tailoring. Nothing’s super tight, nothing’s super short, it’s all a little bit more for men, not for little kids [or] boys. In Japan, the buyers still think that everybody is 5”6’ and sixty kilos.” At Bryceland’s, jackets start from a size 44 all the way to a 56. Trousers go up to similarly proportioned sizes with “mixing and matching” for both lean and not-so-lean guys. “I know what looks good on a guy who isn’t necessarily a model figure, who isn’t thin and tall with perfect proportions.”

Ethan himself isn’t perfectly proportioned either, and it’s probably the first thing you’ll notice about him. He’s a bald, burly, bearded bloke with a lot of heft, or as he so lovingly puts it, a “fat bastard”. That being said, he always looks sharper than a razor, whether in a bespoke suit or t-shirts and jeans – so sharp that there are hundreds of photos of the bloke online. And in those photos, he always seems to be thinking about something important (or maybe about how to punch you). “I never smile in photos…looks better if I don’t.” Either way, it appears to be a common thing amongst menswear guys, that I’ll never understand.

As a big believer in not polluting the world with more clothes people won’t wear, Ethan runs made-to-measure and bespoke programs all year round at Bryceland’s – sometimes with international guests, such as Dalcuore and, more recently, W.W. Chan, making an appearance.

But his relationships with tailors and artisans extend far beyond just inviting them into the store. Phillip Car of Saint Crispin’s shoes has helped Ethan to create a last exclusively for Bryceland’s, Salvatore Ambrossi, has made a ready to wear line of trousers for the shop and Dalcuore have even “completely changed” their cut “just for Bryceland’s and only sold for Bryceland’s.”

Yet with all the remodelling, Bryceland’s garments do share one thing in common: a focus on sturdy fabrics and superior construction. His Ascot Chang WWII officer shirts, for example, are made of a tough cotton drill. “It was originally in wool, so I had them copy it exactly, because I really like the way the one piece collar was done, and the way it rolls into a lapel.” From the Seven Fold neckties made from vintage wools and silks scattered around the store, to the solid stick umbrellas huddled together in a metal container that almost resembles a bargain bin, everything in the shop will last decades. Trust me. Or better yet, trust Ethan.

“I think it holds true, not just for workwear and casual wear, but for actual tailored clothing as well.” Ethan says of his clothes. “[What we have] is a little more rugged, a little more hearty, and the styling’s a little more classical and old school.”

He pulls out a pair of jeans that have over time sculpted to the shape of his knees and hips as he puts his coffee down on the counter. “I just did a WWII denim, and this is my first prototype,” he explains. “In WWII they were rationing all the materials they would have so they did have things like, missing all the rivets and using odd fabrics for the pocket bags and the cuts are a little different.” He points to the un-engraved rivets, and then to the red tab on the back pocket, and then to the tears and rips. “This is the sort of stuff that most buyers would have no interest in, but their customers do, which is weird.”

Whilst immediately recognisable quality is important to him (and his clientele), Ethan believes there is something strangely rewarding about the experience of wearing something that will age beautifully, something possibly even greater than the Bryceland’s shopping experience itself.  The store isn’t exactly pretty, at least when compared to P. Johnson, but it has a romantic vibe about it, especially when you can walk away with a pair of jeans that resembles (or will one day) clothing from another era. “[Patrick Johnson] did what I could for example never do, which was make tailoring cool.” Ethan has a particular soft spot for his ex-boss now-mate. “I can just do the geeky stuff. He’s a cool, good-looking guy who wears his clothes well and makes it look very approachable to guys who wouldn’t normally be into in classic tailoring.”

“I mean I did all of this,” he says gesturing to the immediate vicinity. “And I like the way it looks, but it’s definitely cluttered. It looks like my house, it’s a mess. Whereas they [Patrick, and his business partner Tom] do it and it just looks super clean and organised. I’m not cool enough to do what he does.”

And whilst being cool isn’t a necessity, in the Australian fashion industry, it’s definitely a plus. “I was told by a HR manager once, “You don’t go to the right parties to be successful in the fashion industry,” and I realised these were all the parties that were almost exclusively for men. And that’s not how I am, so it was kinda very exclusionary to a young straight guy who wanted to play with interesting things – at least the side of the industry that I was exposed to anyways.”

“When I was young I used to always say, I’m gonna get out of Australia I’m never going back,” he adds. “Even when I left, I was kinda of the opinion that I was never gonna live there again. I didn’t fit in there, I didn’t quite get the culture. I’m not typically Australian. So, there was never really a place for me there.”

“But I do miss it,” he confesses. “Sometimes I just wanna go back and have coffee early in the morning, which you can’t do anywhere else in the world but Australia it seems. Coffee shops in Japan open up at eleven, instead of at Terrigal beach where it’s like six thirty.”

And just for a brief moment, we place our empty cups down on the table and I look up and find that look on his face again: the one he puts on for photographers.

He sits on the hardwood counter, waving through the window at his Japanese neighbour leaving home and then he folds his arms. And with that, I pressed the button and the camera did its thing. 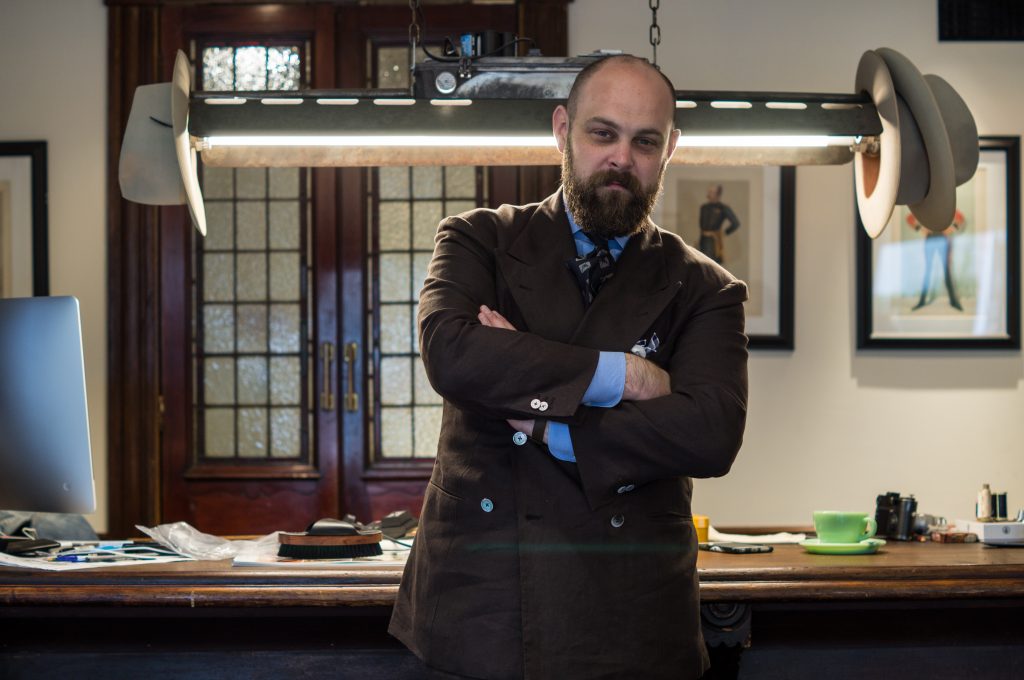