Hidden on a busy road in Osaka, sandwiched between a ramen bar and an office building, is Coccinella, a bespoke salon presided over by second generation master tailor, Takashi Chujo.

Actually presiding is a bit strong. Takashi, 53, is an unintimidating man standing at only five foot eight. He slouches slightly, sports a soul patch, and wears octagonal frames that might’ve belonged to a Jazz musician.

“His father was a tailor in the English style,” introduces Takashi’s apprentice and interpreter Kosuke Onada. Kosuke, 35, whose own father wanted him to be a lawyer, is tall and gangly, with a boyish face and sparse facial hair. He continues: “But Mr Chujo prefers Italian style.”

Indeed, the day we meet the master tailor, he’s wearing a green linen sports coat, white twill cotton trousers, and suede tassel loafers that make him look like a Japanese Gabrielle D’Annunzio. His apprentice, on the other hand, dresses like a stylish middle-aged Italian man, with his navy linen suit, sky pencil stripe shirt and knitted tie.

The Bottega Del Sarto the two work out of is also undeniably influenced by the Mediterranean. Bolts of fabrics and cloth books are organised on wooden shelves next to a reference library of classic menswear manuals. To the left of these is a cramped rack of commissions still in the basting stage. Scattered throughout the atelier are also samples that exhibit the tailor’s eccentricities, including a tangerine suede jacket (too hot for Japanese summers) and a waistcoat with a calfskin leather front and tweed back.

This nonchalance finds its clearest expression in Takashi’s Florentine style of tailoring, a regional Italian approach that emphasises round lines and muscularity. 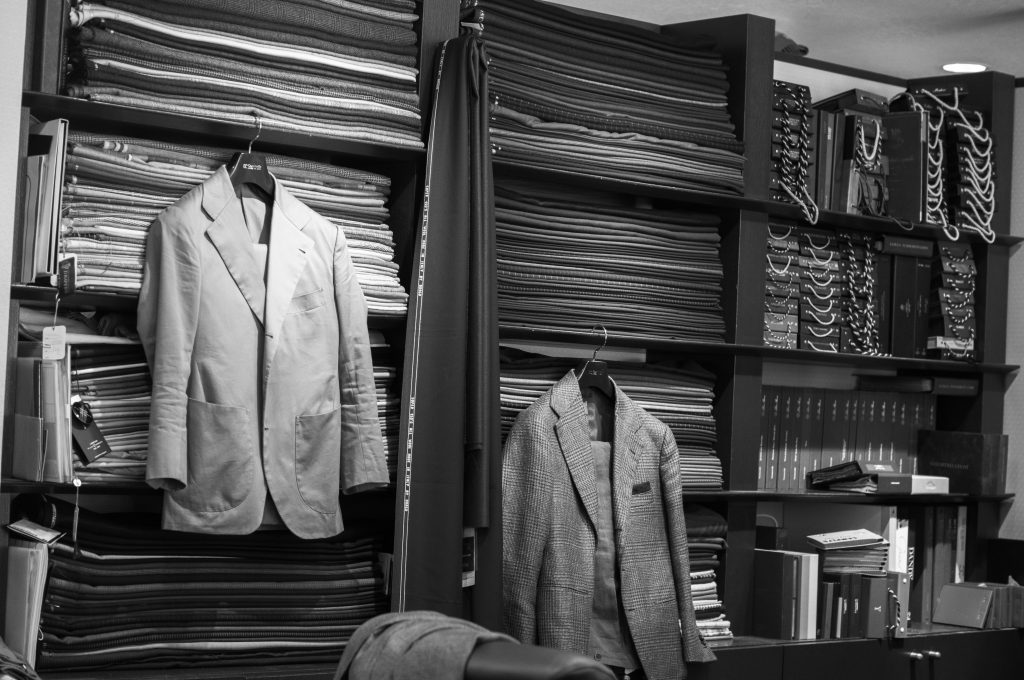 Florentine jackets are cut with sloping shoulders that fall naturally into a clean sleeve head. Lapels and collars are cut wider, and notches and lapel gorges are generally lowered. The chest is also fuller than the fitted Roman silhouettes seen on Italian brands like Brioni, and features a rounded shape which reaches its apex at the middle button, before extending into curved quarters that sweep outwardly towards the hips, and away from a lightly suppressed waist.

Unlike other Italian styles, Florentine style jackets also use side darts instead of front darts. These slits, cut at diagonal angles close to the side seams, parallel to the line of the wearer’s arm pitched slightly, give shape to the jacket’s waist resulting in a full-bodied silhouette that maintains a clean front. These elements, combined with high armholes and lapels that roll voluptuously outwards, create a look that is both romantic and restrained.

“I prefer softer style,” Takashi says, explaining his decision to turn away from the structured English tailoring his father taught him. “It is not so strict and more comfortable.”

Softer tailoring might seem superficially simple but it actually requires a delicate touch and an intuitive feel for fabrics. Chest canvasses must be weighed carefully against lightweight fabrics to avoid any rippling, and the padding must remain invisible to ensure that the idiosyncratic curves of the Florentine style aren’t interrupted. Even Kosuke, who has spent seven years as an apprentice — and before that five years as an engineer — still expresses some difficulty mastering the style. “It is a very different way,” he says. 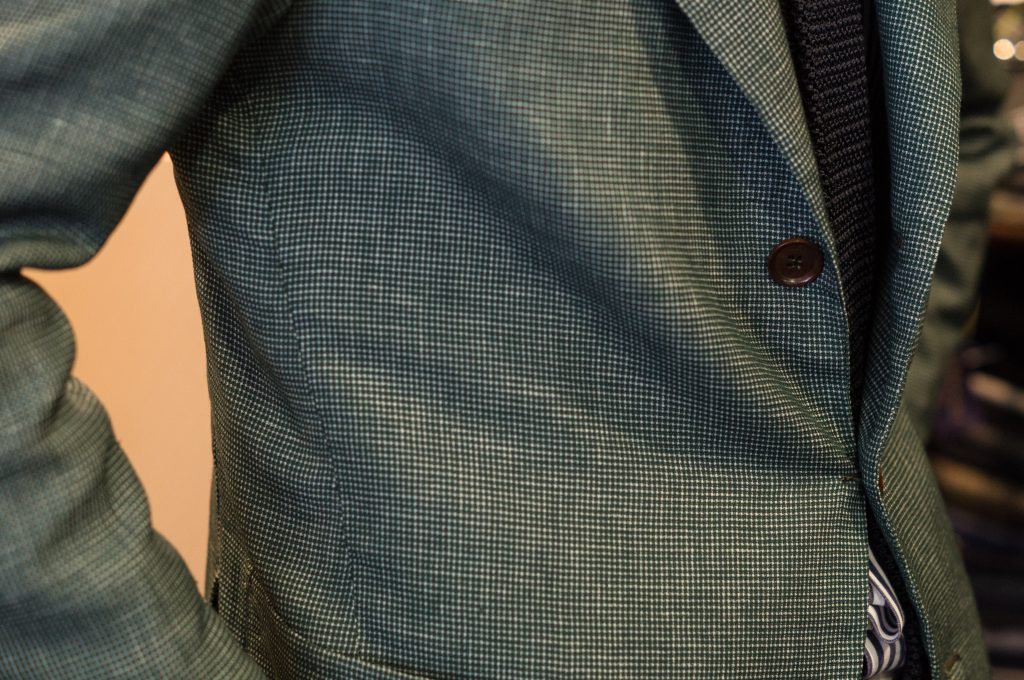 During Osaka’s hot summers, however, the lighter Florentine approach is a necessity. Temperatures can reach 31 degrees Celsius and the weather fluctuates between hot and humid, and scorching dry. Showing off a favourite tobacco sports jacket, Takashi mentions that he wears linens from Spence Bryson and Cacciopolli in summer, but in winter he prefers heavier English cloths like tweeds and flannels from Holland & Sherry.

The approach is eclectic yet deeply respectful of tradition. “Coccinella is Italian for Ladybug,” Kosuke explains. “In Europe this is a metaphor for fortune and good luck. The Ladybug climbs up the stems and fly away. It never climbs down”.

In the case of Coccinella, Takeshi’s ambitions have bolstered the atelier’s reputation as a destination for Italian style both in Japan and beyond. A strong social media presence on Tumblr and Instagram, and a recent trunk show in Hong Kong, has exposed the atelier to clients from as far as Thailand and Australia — many of which are being introduced to Florentine style for the first time.

With the current shortage of young Italians willing to pursue the fine (and intensive) art of tailoring, one day the men may even export their own crafts back to Europe. This isn’t as farfetched as it sounds. Some of the world’s best Italian tailors are Japanese, including Noryuki Ueki of Ciccio and Kotaro Miyahara of Sartoria Corcos. And while the streets of Osaka are a far cry from the quiet lanes of Florence, the Italians and the Japanese both worship at the same altar of craftsmanship.

But what comes next ultimately depends on the skills of the master and his apprentice.

“Is Kosuke a good student?” I ask Takashi.

He pauses for a moment, tilts his head to the right and mutters something in Japanese.

“He says he has to be nice in front of the camera,” Kosuke laughs. “I’m still learning.” 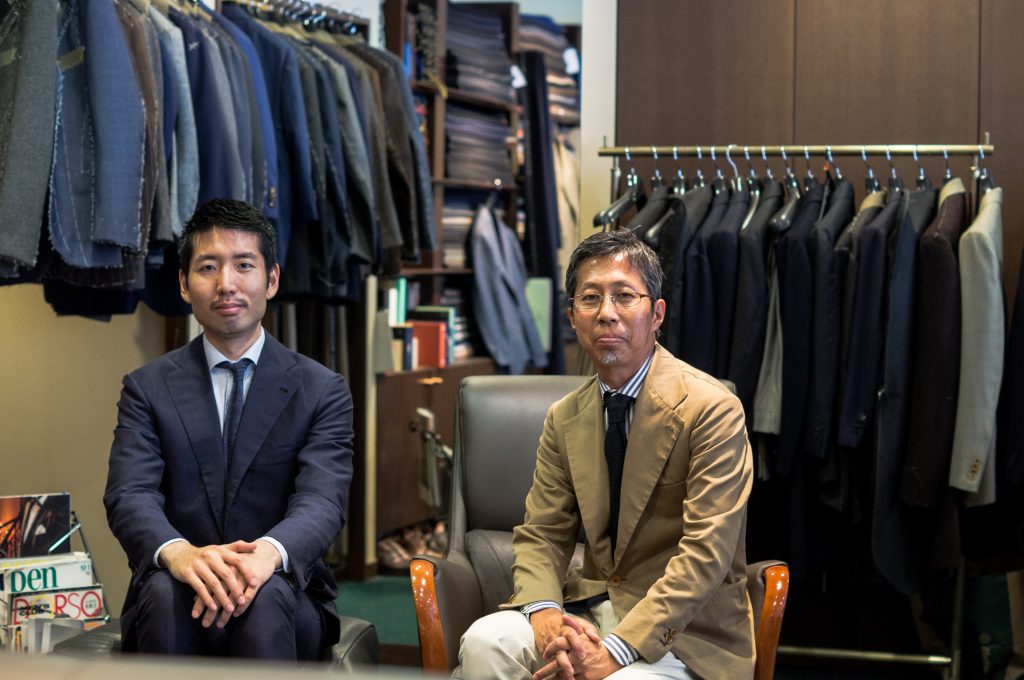