Though often mistaken for velvet, corduroy is hardly luxurious.

Corduroy’s name comes from from the French “cord du roi” meaning court of the kings.  However “cord du roi” refers not to the silk jackets worn by kings but to the cotton hunting outfits worn by their servants. Consequently it is considered  a “poor man’s velvet”  making it a perfect fabric for university students, myself included.

Being a fabric with agrarian origins means that it is incredibly functional. Corduroy is a plain-or twill weave cotton fabric with a cut pile surface of wales (raised rows of fabric) responsible for heat insulating properties that make it appropriate for cool weather and which also grants it high tensile strength. However like most other agrarian fabrics its appearance is polarising. G.B. has described it as “making the wearer look like an old university professor”. Mike had one look and refused to comment.

I was not surprised therefore when the sales assistant informed me that he had found it exceedingly difficult to sell this particular jacket. In addition to corduroy’s lack of immediate aesthetic appeal the jacket is also a  striking red – something that would be considered too ostentatious by most university students.

When wearing something of this intensity an appropriate strategy is to avoid overwhelming the viewer gaze by turning down the intensity of the other elements slightly without muting them completely. 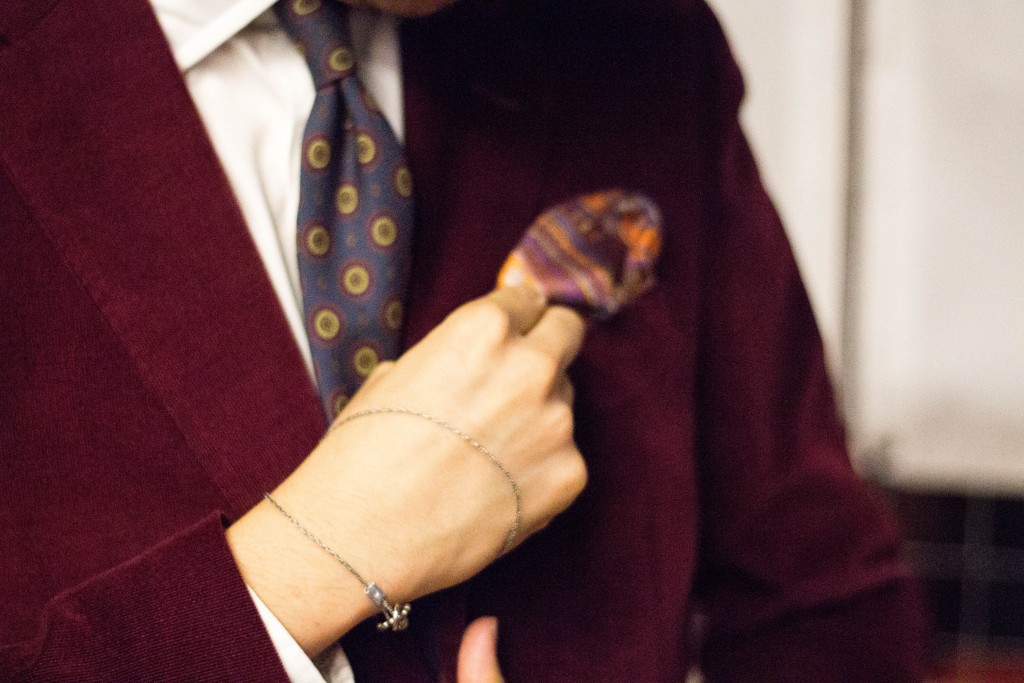 I have paired the jacket with a vintage navy, medallion tie from Balenciaga, picked up at at a thrift store in Sydney, to add some visual interest without making the outfit garish. Similarly I have selected a white, spread collar shirt to keep the composition grounded. Though an Oxford collar button down (OCBD) would have worked equally well it would have demanded a different selection of neckwear as its casualness would have contradicted the tie’s formality. The silk paisley pocket square from Ascot for Henry Bucks (purchased for $15 during the retailer’s summer sale *bingo*) adds calculated excess while also picking up on the tie’s colours.