Our favourite t-shirts on the market.

The t-shirt is a democratic garment. A workwear and streetwear staple, it is the easiest thing you could ever wear. But the fact that there are literally thousands of options available can make finding the right one a pain.

Hopefully our picks make it easier. 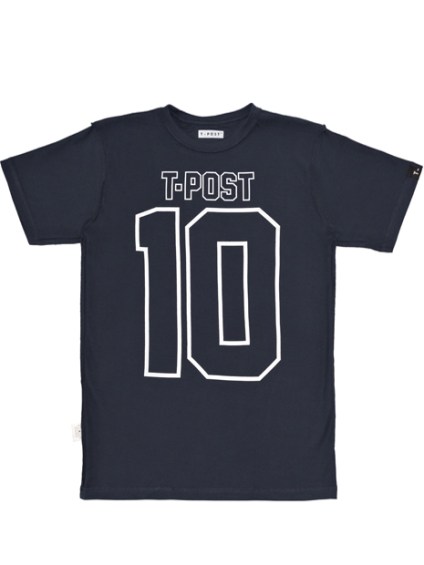 Founded in 2004 by Peter Lundgren, T-Post publishes a magazine on the inside of crewneck t-shirts.

T-Post’s tees are pieces of journalism woven in thread. Each shirt offers a new take on the state of the world the way the editors and the people they work with, see it. Any odd issue could feature interviews with artist and designers (including the likes of Ricky Powell, Jason Sho Green, and Tony Arcabascio) or passionate rants, such as a case for why we’re ” losing our sense of respect for genuine, handmade craft.”

Out of all their back-issues, their 10 year anniversary edition stands out with its commentary on the state of the printed word.

“It’s been 10 years,” writes Lundgren. “Seems like just yesterday, but back then magazines and books ruled the world. Words were important, but picking the right size, the right paper stocks, and the right printing techniques where just as critical. Little did we know the digital age was upon us and reading would never be the same.”

Words are still important, but where we choose to print them should change and grow. – Johanna 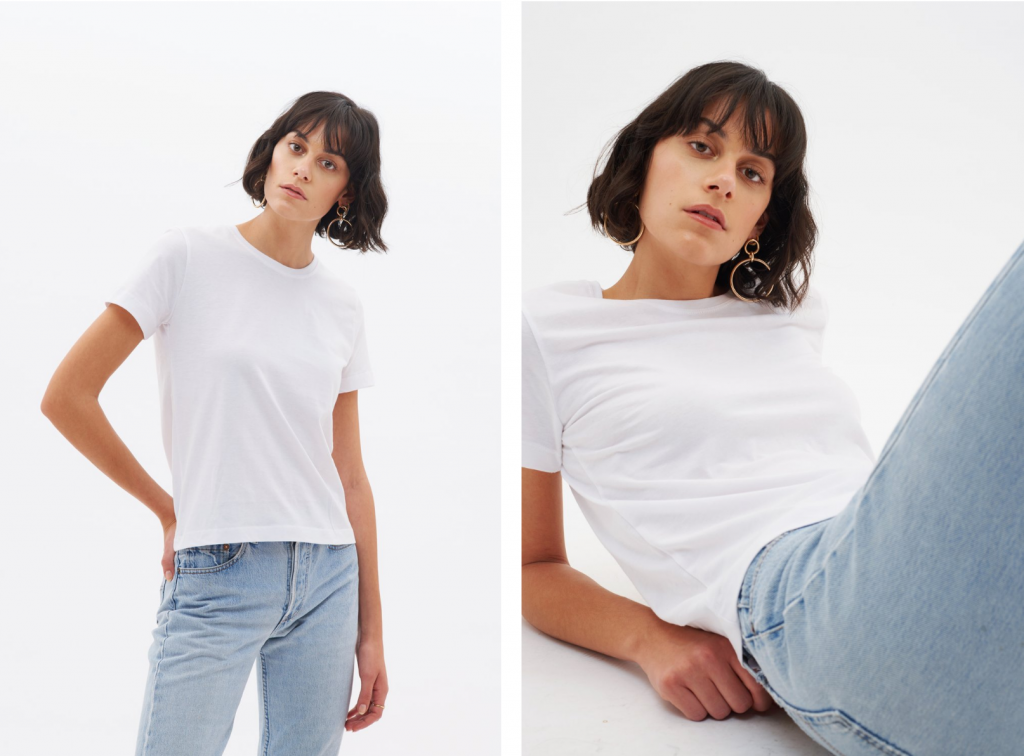 I’m not a t-shirt kind of gal. Ask any of my close mates about my days-off and they’re likely to point to fitted tank tops paired with my favourite gym leggings. But also being a major denim head and owning about 20 pairs of jeans, it would be sacrilege to not have at least a decent staple tee to go along with them. My struggle then, is coming to terms with worrying about the wear and tear that inevitably comes with luxury t-shirts.

An emerging favourite in menswear, the Canadian brand has made a name for itself with their 100% Egyptian cotton essentials. Available in both a masculine and feminine cut, their Essential Crew is made from lightweight, and breathable 130gsm (grams per square metre) jersey.

But what really makes Kotn’s t-shirts great, are their ethical farming and labour practices. Paying homage to the heritage of luxury cotton production, Kotn’s direct trade with local Egyptian farmers promises sustainable employment and agriculture to protect the industry. They’ve also integrated into the ecosystem of the Nile Delta by partnering up with a local NGO to combat poverty and illiteracy. Constructing safe and accessible schools for quality primary school education, Kotn promises to give back to the community.

And in a world where a tiny embroidered logo can mean brands charge several hundred for a plain cotton tee and questionable business practices, I’d say this is more up my alley. – Sharon

Every Bootleg T-shirt Ever 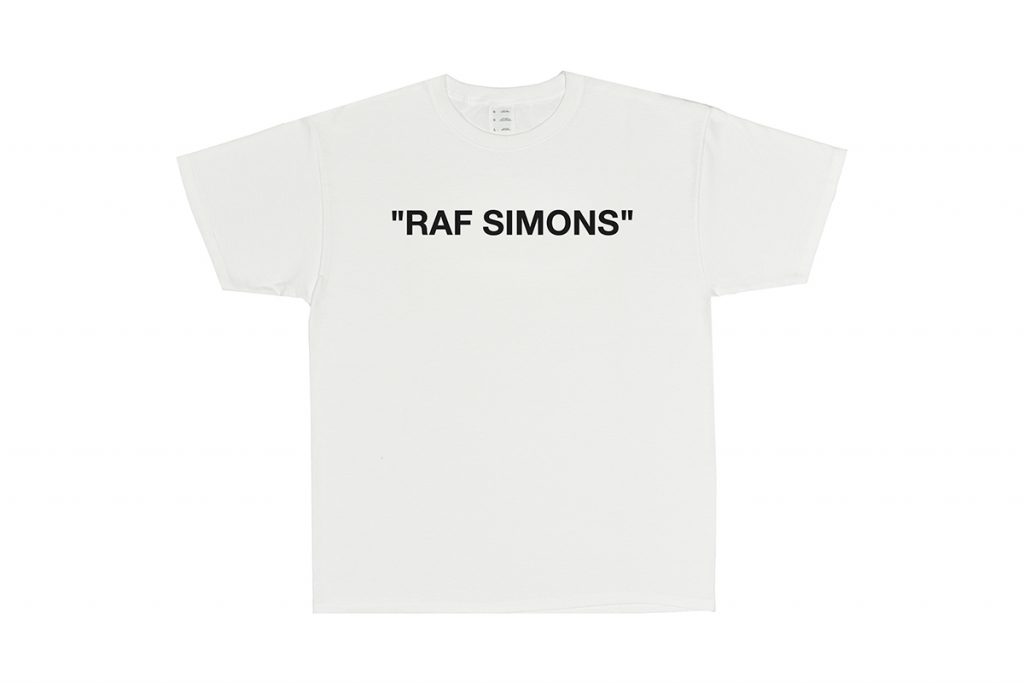 This the next big thing bro and nobody knows it. But trust me you gonna rep that shit like it’s real because the real shirts aren’t as much fun as the fakes. Why rock up in ‘Balenciaga’ when you can give them the ‘Beijingciaga’? When I rock this badassery, people either be giving me disgusted looks or thumbs like Lino cause this be acquired taste.

People not loving their five-hundred-dollar t-shirts after a guy start stunting in a clearly fake rendition like he bossin’ up on you. Haters gonna hate, potatoes gonna potate, and it’s a weird flex but ok. – David 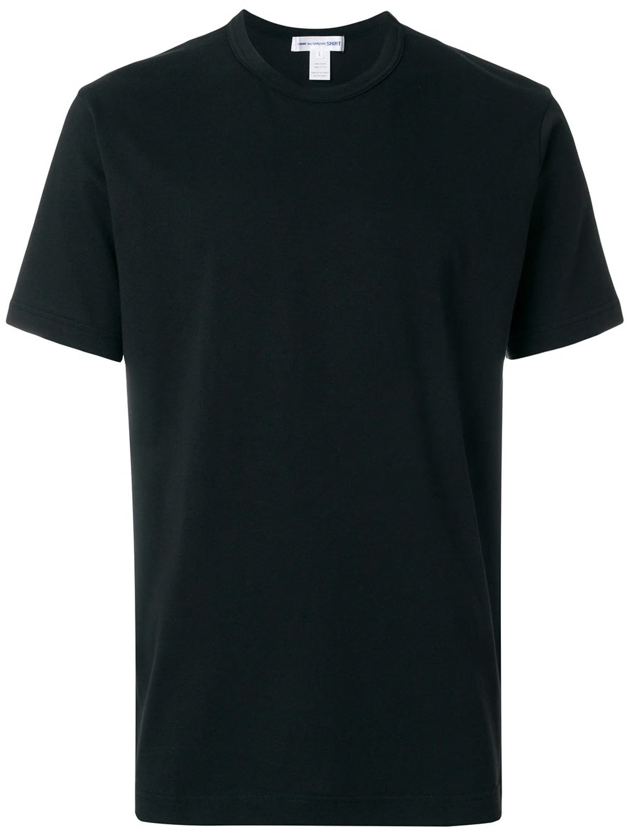 In the past year, I’ve been a big fan of crew neck t-shirts. After being introduced to them by a friend of mine, they’ve become a staple in my wardrobe. You can say I’m quite conservative when it comes to my tees ( I like my décolletage concealed and away from the sun). But I also find that they make my outfits a lot cleaner and adds a slight touch of sophistication. They’re great for dressing up or down an outfit – be it sweatpants for a quick pop in by the local supermarkets or with tailored trousers for a more elevated appeal.

I’ve been a quiet fan of Comme Des Garcons, but I can never see myself pull off one of their avant-garde pieces. However, at $90 for one of their cotton tees and to be a part of Rei Kawakubo’s legacy, I say, count me in. – Jeff 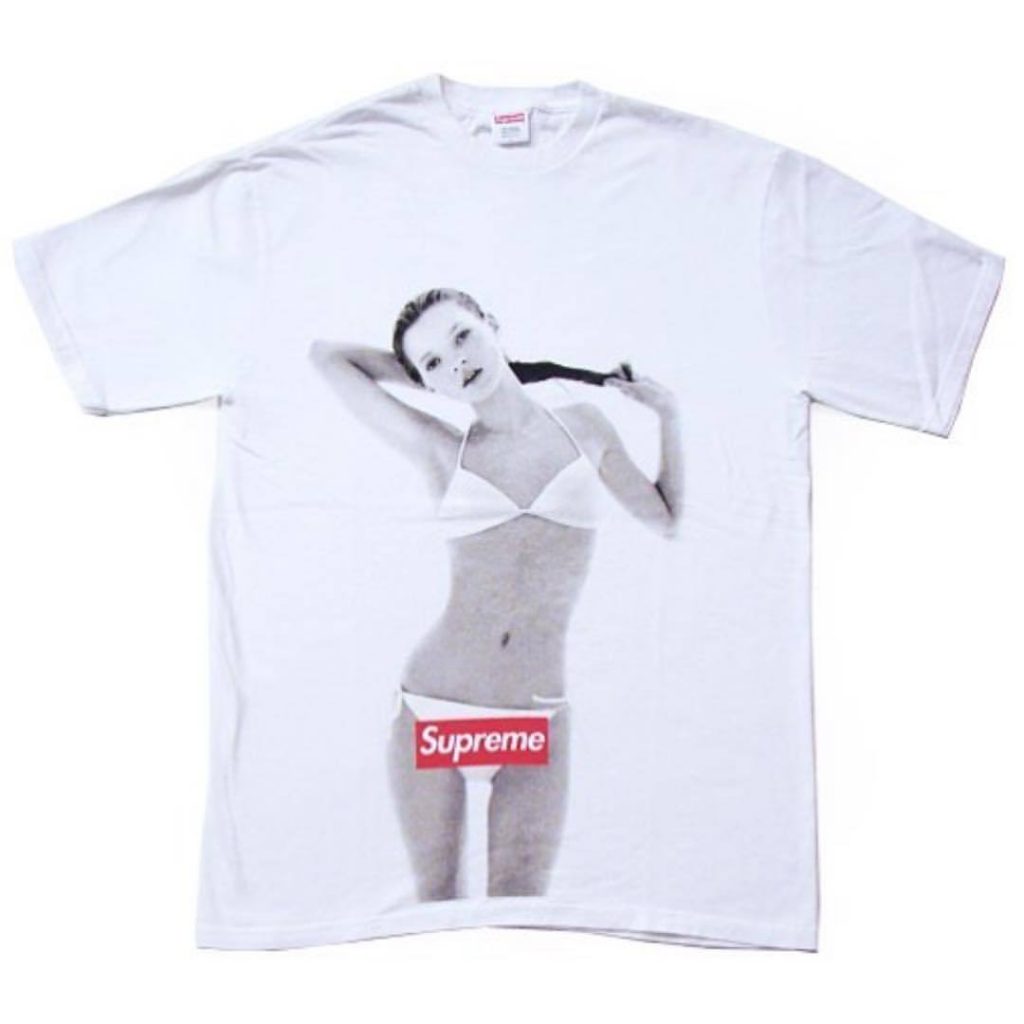 Few brands today are as influential as Supreme. The New-York based streetwear label inspires lines of hypebeasts with every drop; its merchandise commands ludicrous prices on the second hand market; and it collaborates with the biggest names in contemporary art. It’s OG streetwear, uncompromising in its aesthetic and values.

And its entire ethos can be summarised in just one garment: the Kate Moss T-shirt (2002).

This white T-shirt might look uninspiring, just a photo of the supermodel with Supreme’s box logo above her crotch, but it belies a fascinating history.

In 1994, Supreme logos were everywhere. People slapped the brand’s shop stickers onto bus stops, on subways, on billboards, and inevitably on Calvin Klein ads too. Nobody knows who started it. Was it bored Supreme staff? Skaters who copped the brand’s merch? James Jebbia himself?

Whoever it was, Calvin Klein threw a tantrum when he found out. He accused Supreme of guerrilla marketing and sued the small skate brand. Supreme’s customers must’ve found it hysterical at the time. Klein had infamously risque campaigns. His photos had a stark minimalism that made heroin chic cool, starring waif-like teenagers who wore nothing but underwear. No surprise then that Klein’s overreaction made him look like a poseur; someone who courted controversy but lacked the courage to go balls deep.

In many ways then, the Kate Moss T-Shirt (2002) wasn’t really designed at all. Instead it was something that just came to be: a symbol of irreverence, resistance, and rebellion borne out of the attitudes of a community.

In 2012, Supreme released a new series of celebrity t-shirts. Only this time, Kate Moss let the brand use her photo willingly. Cigarette in one hand, hair tussled over her shoulder, and wearing a faux-leopard coat, the older Moss looks like a 60s beatnik. She regards the camera with a glint in her eye. There’s a sense of distant cool, as if to say: “Come on, judge me. I dare you. Or don’t. I don’t really care.”

In other words, she looked positively Supreme. – Will

Read about the history of t-shirts here